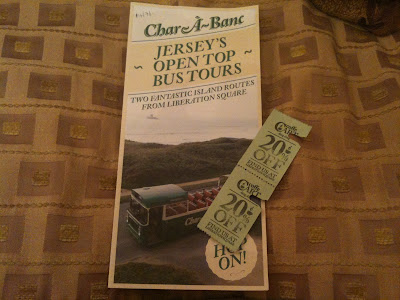 We woke on day three to beautiful, glorious sunshine! We therefore decided to do the open top bus tour today, in case the weather changed for the rest of the week.

The bus, which is a lovely old fashioned one, departs from outside the main hotel opposite Liberation Square.
Our first tour departed at 10.00 and we were joined by tourists from a variety of European nations. Our driver was a lovely chap called Paul who coped with the driving of the bus beautifully and added interesting bits of information to the recorded site seeing announcements.

Across this part of the island there is an abundance of fortifications. Originally those built to protect the island from invasion from the French, and then those built or adapted by the German Occupation during the Second World War to defend against the British and Allied Forces.