The Elstones: A Novel by Isabel C Clarke 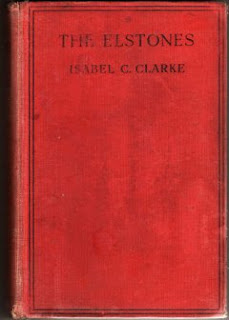 I have had this book on my list of things to check out for a while. The book itself was published in 1919. The reason for my interest is that my Great Grandmother had the surname of Elstone and lived in Hampshire before moving to Surrey. The family though had spent about 200 years in the same area, where the boundaries of Surrey, Sussex and Hampshire meet.

By chance about 10 years ago we were driving from Exeter to North Devon and drove through a hamlet with the name of Elstone. Brief research revealed that the Elstone's in this part of Devon had links to the paper making industry, as did my Elstone in the Sussex & Hampshire area. So I was immediately intrigued.

This book eventually made it to the top of my pile and I stepped into reading it. I made sure I had a notebook as I wasn't completely convinced that this was a novel. Perhaps there might be a grain of non fiction?

The first scenes are set on the Downs in the County of Sussex. Lady Cynthia Elstone is looking out and makes a visual comparison to her native Devon. Meanwhile, her husband who she married 28 years previous and is unwell and dying. Sir Simon requests that his wife call for the priest in the Shawhurst and Cynthia refuses. The family are not Catholic hence the refusal. Meanwhile, her daughter, Irene, nicknamed Ernie overhears the conversation and asks her brother Luttrell to go and fetch the priest. He does and despite all the general confusion and anger from Cynthia, Simon Elstone converts to Catholicism on his deathbed.

The eldest son, called Ivo does not play a very prominent role in the book which is surprising for the time. There is real anger of the religious conversion and the daughter Irene returns to school complete with a hidden rosary and as I read through the pages it is clear that she is turning her religious mind.

Overall I enjoyed the book. It was refreshing to read and I had to keep remembering that this book was written before women achieved the vote here in the UK. I was surprised by the anti Catholic feeling at this time. I feel sure that this is a novel, but I can not help wondering why the author chose the name of Elstone and who and what provided the inspiration behind the plot.
Posted by Julie Goucher at 12:09 pm