I had a real urge to eat a huge chuck of cheddar through this book.

It is a rather fascinating account of which beers to drink and whilst consuming various cheeses.

A huge focus on beers of the US, but there was mention to some European beers and ales. Lots of explaining and information on why some beers are heavier than others and then why particular cheeses work with those beers.

There was mention to the various regional and area beers of the US and those that had a basis on beers from other Countries for example the beers that had an Irish heritage.

I have to say that I love cheese and probably rather boring in my consumption of it. I like a very strong cheddar. In England we tend to classify them with 1 meaning very mild and 5 very strong. I usually by at least a 4, whilst hubby likes a mild cheese usually a 1 or 2. Every now and again I offer him and piece of cheese which he takes and then I watch the facial expressions as he realises he has been "had" again!

That said, I do eat various Italian cheese, Edam from The Netherlands and I always used to like Roule with strawberry. A lovely soft French cheese was perfect with Hovis biscuits. Sold in very few places, there was a cheese shop in my home town and Harrods amongst a few others. Sadly, the makers have stopped making it. I did email the company, but never received a response.

Turning to the beer aspect of the book. I am not a beer drinker really, although I do like a shandy on a hot summers day, but those are few and far between in the wet isles! Meanwhile, hubby is the occasional beer drinker, liking lagers, and ales.

Here is a picture of a tinned advertising feature. These are reproductions, well they were made in the late 1980s from 1930s originals. The picture is of Newcastle Brown Ale, which is always the ale that I put in the Christmas Puddings then hubby gets the left overs! 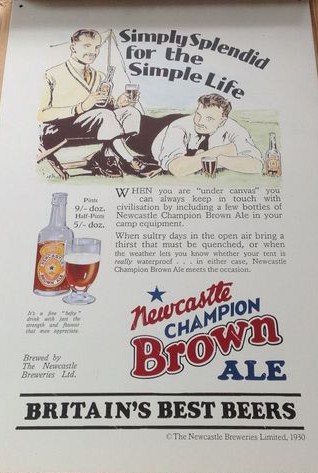 For me this book was a winner. It made me think and reflect on our eating and drinking habits. Shared conversation hubby as we chatted about the various beers and cheeses.  This is definitely a book that would be great on my cookbook shelf and there is potential for someone to write a similar book featuring the various beers and ales of the United Kingdom.

Overall the book was comprehensive, well written and researched.

Disclaimer - I was provided with a copy of the book via NetGalley in exchange for a honest review.