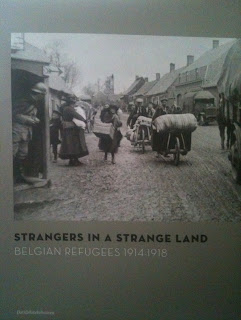 Written to accompany the exhibition of the same name located in the In Flanders Field Museum in Ieper this book tells the fascinating account of the people of Belgium.

Thousands of Belgians fled their homeland to avoid the occupation of German forces during the First World War. Many fled into the neighbouring countries such as France and The Netherlands who were, in accordance with policy at the time placing Belgians of fighting age into internment camps where they could be joined by their families. It was a matter of time before The Netherlands were simply out of room and France was no longer safe and so many thousands sailed across the Channel to the United Kingdom.

This book tells the story, initially with a series of chapters explaining the historical events and is accompanied by quotes from people who recalled the events. There are also some amazing photographs of not just Belgium, but also of France and the United Kingdom and of course the refugees.

Upon the end of the First World War many Belgians returned home and were ridiculed by fellow Belgians because they had not endured the occupation of the German forces and I was very aware of a similarity with a book I read about those who fled the Channel Islands for the United Kingdom in the Second World War.

A fascinating book, both in terms of written subject matter and photographic substance.

Taking part in War through the Generations and Paris in July which is hosted by Karen from BookBath and Tamara from Thyme for Tea
Posted by Julie Goucher at 7:40 pm