Back in 2011, I shared the details of my earliest ancestral links to Australia with a post about Captain George Bridges Bellasis and his wife, Esther nee King.

I first became aware of the Bellasis connection to my ancestry back in the late 1980s. I then did little research into that line beyond the records that existed in the rural Surrey parish of Puttenham and created what is on line as the Puttenham One Place Study


Esther was born Ester King in 1770, the daughter of John King and Mary nee Budd. The whole story resembles that of Pride and Prejudice as John and Mary had a family of 10 children, 9 of whom were girls. I can almost here the cries of Mary King as she worries about her daughters finding good husbands.

Just how the King daughters became connected to the Bellasis family is intriguing, but all but two of the girls (one married in England and the other died in 1795 aged 17 years) married men connected to the Honourable East India Company (HEIC) and their son also spent time in India before dying in the Gulf of Persia in 1812. The link to how I established this is rather wonderful. The Curate of the parish of Puttenham was a man called Charles Kerry. During his time in the village he kept a series of manuscripts and as part of those there is a reference or two to the Bellasis connection. It was this fact that acted as my springboard.

Ester married George Bridges Bellasis in 1796 in Calcutta India. George was known as the most "Handsome man in India" a fact gleaned from the book written about the Bellasis family called "An Honourable Company" by Margaret Bellasis published in 1952. What has been established is that the girls went out to India in instalments, as they became of age and they were dispatched to parts of the "Empire" in the care of the elder sisters.

The story is that one of Esther's sisters was proposed to by Arthur Forbes Mitchell, a partner in Forbes & Co. The proposal was later retracted and a dual between the Forbes Mitchell and George Bridges Bellasis ensued. As a result George Bridges Bellasis was sent to Botany Bay for life for killing the proposer, having been transported on board the ship called "The Fly" in 1802. When he arrived in Sydney, George was immediately given a conditional pardon by Governor King and on 24 June 1803 received a Royal pardon as an "act of commiseration towards a gallant, but unfortunate officer and an afflicted dying wife".


I wondered about Ester. Just what had her life been like? Married to a well to do member of the HEIC, was she shamed because of the dual and subsequent outcome of that?, then transported like a common criminal? I wish I knew just what she thought and felt. I wondered just what research material had been left behind of the Bellasis time in Australia. George it is well documented as a military man in Australia and India, there is evidence that he was involved in the Freemason movement in the early days of the colony. 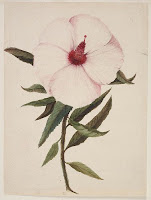 I did a search on line for "Mrs Bellasis"+Australia and for variations of - Botany Bay, Ester Bellasis and was very surprised to find this painting. Pink Hibiscus and is titled "The Carrajan by Mrs Bellasis, Sydney and was painted circa 1803.

I sent off to the archive, The Mitchell Library, State Library for NSW, for a electronic copy and it is one of my genealogical treasures. What is especially wonderful is that the painting by Ester Bellasis is the earliest known piece of artwork by a woman in Australia, so it looks like Ester made her mark after all.


George and Ester returned to England in the early 1800's and Ester is commemorated at Puttenham Church having died in 1805 in Berkshire, at the Bellasis home. George returned to India and later remarried, to his deceased wife's sister, Elizabeth Kent nee King, herself a widow. George died in India in 1825 and the sister Elizabeth in Kent in 1837.

Since that initial research I have spent time researching the life of Esther's sisters. From research it is possible to say that Esther was not the only one to have married well and I can almost feel the excitement and relief of John and Mary King.