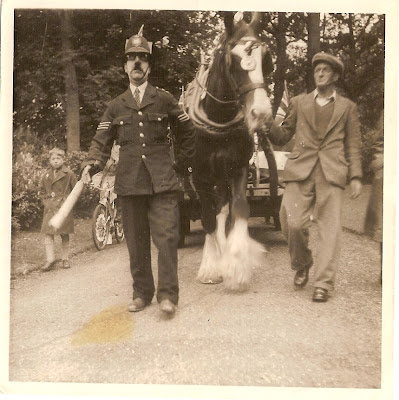 This first photo is the only one I have of one of my Grandfather's brothers.

This a photograph of the Coronation Parade taken 2nd June 1953. The reverse of the photograph is written by late Great Aunt Dorothy May nee Butcher. The man holding the horse is her brother, my Great Uncle Dick, who was christened Percy in Wanborough in 1906.

My Uncle moved to Horley with his wife Molly nee BEST, so it could have been taken in Horley, but a hunch tells me it is Manor Farm at Guildford. 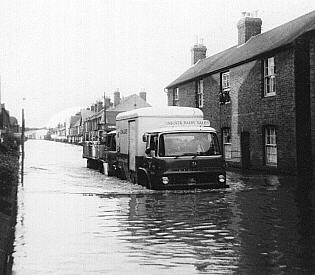 This photo I may have shared before. This was taken in Guildford in 1968 when the River Wey flooded its bank. My Grandparents are in fact looking out of the window and can just be seen. (Copyright of this photo goes to Allan)

The final photo was given to me by my Grandfather's cousin, James Butcher. Apparently it is of "One of the Crook Grandmothers". The Crook family were originally, I have established from London, but they moved South to Guildford, where they farmed in Worplesdon outside of Guildford. The Crook family often intermarried with part of the Butcher family, not always too successfully! Taking part in Sepia Saturday
Posted by Julie Goucher at 1:00 am