This week I am sharing one of my favourite images from my Guildford collection. It is an early picture, dating to 1880 and is of the cattle market at Guildford, which was in 1880 situated in North Street. At some point the cattle market moved to Slyfield where it is still held, but not with any of the busyness and rush of this picture. 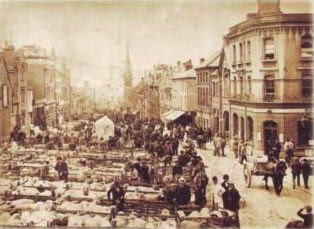 North Street had in times gone by the unfortunate name of Lower Backside! although, that was before my time.

I have always known it as North Street and I guess the alternative name reflects its status as it was less popular that the High Street which effectively runs parallel to North Street at the left of the picture.

The High Street in comparison was the main shopping area with a beautiful clock dating back to the 1650s and a cobbled street, which has survived today.

During my childhood this market was not there in this form, but appeared every Friday and Saturday and for those two days, come rain or shine provided the local population with fruit, vegetables and flowers. My Grandmother always used two stalls in particular, one of which was called Hone's. My Mum tells me that she went to school with one of the chaps whose family operated the stall.

Its formation I am sure stems back to when farmers grew their own produce and the surplus they sold, of course over time they simply grew more and more so they could sell it. The stalls have demised the invention of supermarkets and the trendy and affluence of Guildford and the Saturday produce market has almost lost its soul.

Now it is represented by an extension of other market stalls and for my traditionalist brain that is just not right!