For the 3rd year running I am participating in the ANZAC Day Blog Challenge hosted by Kintalk. You can read my previous posts for 2011 & 2012. Like last year my A-Z April Challenge relates to Australia which ties in rather nicely and you can read those posts 2012 & 2013. 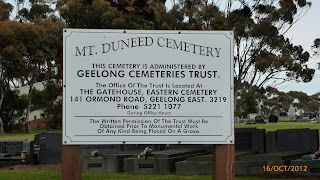 Back in 1991 I visited Geelong to see the area in which my Ellis ancestors had lived when they made the journey from Surrey England to Geelong Victoria in 1854. So it did seem only right that I should return to the cemetery at Mount Duneed and revist the graves.

Overall, they were I think just as I remember, although just a little weather beaten - the wind seems to howl through the cemetery, or it did the day I revisited. My husband dutifully took the photographs for me as I wandered round with my Cousin stopping every so often to view a headstone.

In previous years I have talked about Henri Wilhelm Erickson who was the son of Carl Erickson and Wilhelmina nee Ellis and Edward Ellis the son of Frederick and Sarah Ellis nee Newton. Both Wilhelmina and Edward are descendants of John Ellis, the pioneer of this branch of the family, who made the decision to migrate his family so many miles from home.

What has struck me is the sense of responsibility the family felt to help a cause and fight a war, so many miles from home. In a land that was in some cases completely removed from their way of life. 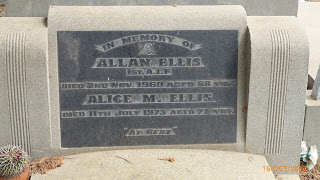 It was as I stood at this headstone, that I pondered on the lives they led once they returned from the War and I realised that I had never explored the contribution Allan Ellis made. Shame on me!

Allan Ellis (known as Jack) was the son of Thomas and Ellen Ellis. He was born in Mount Duneed in 1892 and was the youngest of his family and the only one born in the presence of a doctor.

He enlisted in 1915 in the 1st AIF. He then transfered to 22nd Battalion 9th Reinforcments and returned to Australia in 1919.

ANZAC Day and Rememberance Day which we commemorate in the UK in November is about not only thinking of the ultimate sacrifice these men (and women) made, but of the successes that the survivors of the war had.

It gives us an opportunity to give thanks and reflect upon not only what we know of our ancestors but what we ought to know.
Posted by Julie Goucher at 11:35 am