Earlier this month I talked about the time spent at the Canberra War Memorial. There was quite a lot of focus given, and quite rightly so, to the Australian (and New Zealander's and others) soldiers at the hands of the Japanese occupation of the Colonies during the Second World War.

In the bottom of a glass cabinet, away from light was an amazing quilt - entitled the Changi Quilt. The photographs below have hopefully captured the talent and hope that is displayed within the stitches. 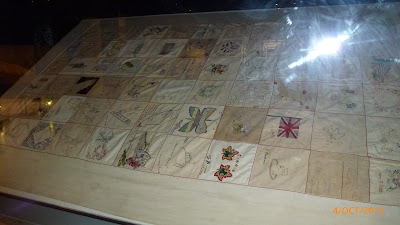 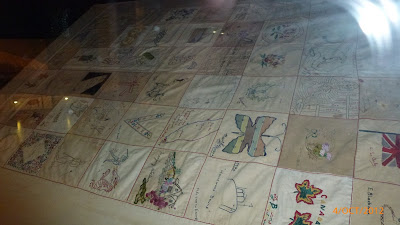 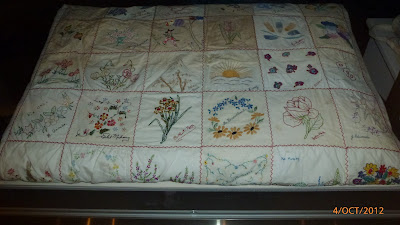 The prison of war camp at Changi held in addition to the troops, around 400 women and children. It was these women that whiled away the hours stitching this quilt.

These women took remarkable risks to create the quilts. The Japanese guards did not like groups, and were often brutal when the encountered groups, including groups of women. The conditions were harsh, the heat unbearable and there was a lack of water and food.

The fact that these quilts were created and have survived the conditions represents the fortitude of the women and the times.

Taking part in the A-Z April Challenge
Posted by Julie Goucher at 11:30 pm