Like many travellers to Australia both our arrival and departure was from Sydney International airport. By the time we arrived in Sydney we had been in transit for 46 hours and had planned to fly from Sydney to the regional airport at Wagga in mid New South Wales. Our journey home, allowed us to have some time in Sydney and today I am going to present a whistlestop tour.

We booked our hotel in central Sydney, about 10 minutes from the main attractions. Our room, a deluxe double (there had been no regular double rooms left) was comfortable, clean and well presented. The hotel is located on Pitt Street and quite simply walk out of the hotel and turn left, keep walking and you will eventually arrive at Circular Quay - the gateway to The Opera House and Harbour Bridge, and Hyde Park. Along the way there are shops, resturants, coffee venues, China Town just to name a few.

We essentially did the walk I have just described, stopping often along the way.

Down to Circular Quay, then to the Opera House and then through Hyde Park.

It was a beautiful sunny day, the temperature was a smidge too hot for me at 32 centigrade, but it has to be one of the nicest days of our wonderful trip. 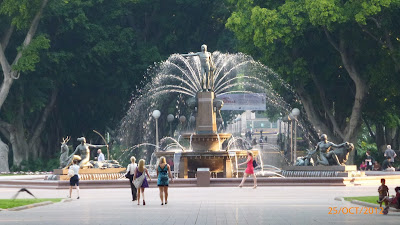 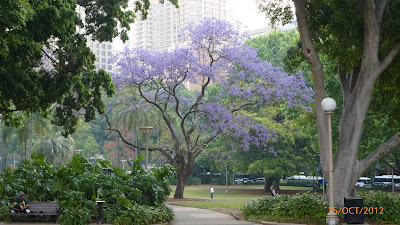 By the time we had navigated back to the hotel we were exhausted. It early evening and after a shower and change of clothes we headed out for dinner. We had opted to try a recommended resturant, but nothing on the menu looked appealing and we decided they traded on the back of the view rather than a combination of the food and view.

We then walked back down to a resturant located along from the Opera House and grabbed a table outside. It was lovely. The view stunning, the food and company wonderful and we struggled to believe it was October and we were sitting outside eating and not wearing layers! It was a different story when we arrived in London a day or two later to zero degrees! 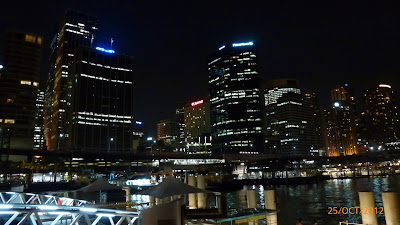 This is very much a whistlestop tour and I could share many more Sydney photos with you, but we need to process to T tomorrow! better still you could explore the City yourself - be prepared to spend at least 4 or 5 days there. It is a fabulous City, welcoming to visitors with so much to offer. I love it!

Taking part in the A-Z April Challenge
Posted by Julie Goucher at 12:30 am