Last year I spoke quite a lot of my Ellis ancestors who migrated from rural Surrey to Geelong in Victoria.


John Ellis married Sarah Turpin in the Surrey parish of Elstead in 1842. 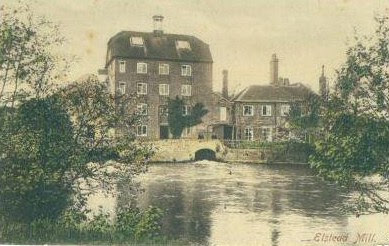 At the time of their marriage Sarah was recorded as a lace maker, as was her father. There is no evidence to suggest that Sarah's parents moved to Elstead, nor what exactly bought Sarah to such a rural parish, but she did arrive in Elstead and worked as a lace maker at Elstead Mill.

John and Sarah migrated, as free settlers to Victoria in 1854. Sailing on board the "British Empire" from Southampton on 17th October and arriving in January 1855. It has always been unclear what prompted their migration. Were they inspired by the gold rush; although there is no evidence they were involved once they arrived in their new Country? Were they encouraged by Robert, who had become a free settler? again there is no evidence of that either.

Sarah's brother Josiah Turpin also migrated with the family, although he sailed on a different ship; The James Baines. He was accompanied by his nephew, young Josiah Ellis who would have been only a little boy of around 5 years old. I wonder how Josiah felt being separated from his parents for the duration of the journey. Another pondering is why the family did not travel together. Was their perhaps not enough berths on the ship, or had illness or funds prevented it?

John and Sarah along with their children arrived in Victoria and made their home in Geelong and I am sure they eagerly awaited the arrival of Josiah Turpin and young Josiah. Once in Australia, John and Sarah added a few more children to their family; Jane baptised in 1855, perhaps conceived just before they left England, Catherine baptised in 1858, Sarah in 1860 and John Henry George in 1862.


Some sadness did occur, with the death of both Rosetta and young Josiah. There were successes too, daughter Jane became a student teacher in Germantown Geelong and the family seemed to have been content in their new home.


John lived a happy and long life, passing away on 8th August 1900 and Sarah 23rd August 1903. Josiah Turpin remained close to his family. Sadly he never married and from what I have discovered there is no mention of the family meeting up with Robert Turpin who was brother to Josiah and Sarah who had been transported in 1830.

It would have been tragic if the family had been in the same Country all the time and not spent some time together or been aware.

So, whilst I was in Australia I had to make the trip to Ellis territory and visit the cemetery at Mount Duneed and take a few up to date photographs. 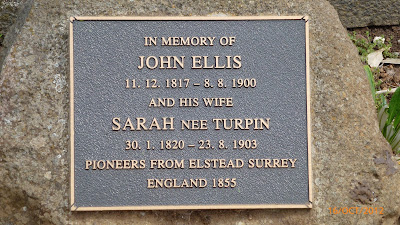 This next photo was the biggest wonder. 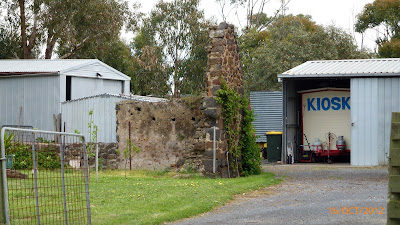 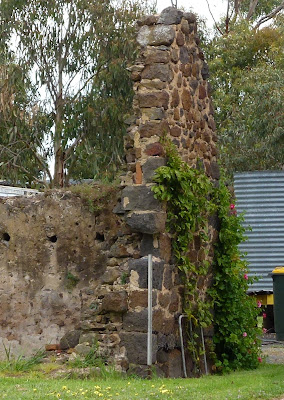 It is a photograph of the last remaining piece of wall that was the house and farm of John Ellis who migrated in 1854. There was something rather special that the current owners had retained the wall and for some very strange reason I did feel very emotional!

The headstone photographs will be appearing at Grave Encounters in due course!

Taking part in the A-Z April Challenge
Posted by Julie Goucher at 8:55 am