This is a photograph of my Mum's first Cousin, who I will refer to as FT. Whilst FT is now deceased, he had an unusual surname and has left quite a few descendants.

I do not know where this was taken, but it was taken in the early years of the second world war, say around 1940. I sent off for his war record for one of his descendants last year, and am awaiting a copy of it to arrive. FT was not one to talk about his war experiences, like many of his generation, but the contribution he made was huge and it is very important that it is recognised. 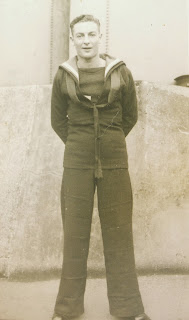 Born in Surrey England to a military man from Dodford, Northamptonshire. FT spent time in the Royal Navy before being demobbed at the end of the War. On the way home, the vessel experienced some engine trouble and pulled into port. Having been told that there was a delay of about six weeks FT pointed to another ship, asked where that was going. Upon hearing and approving of the destination he changed vessels and never looked back.