For this week's visionary prompt of standing in doorways, I thought I would share this image 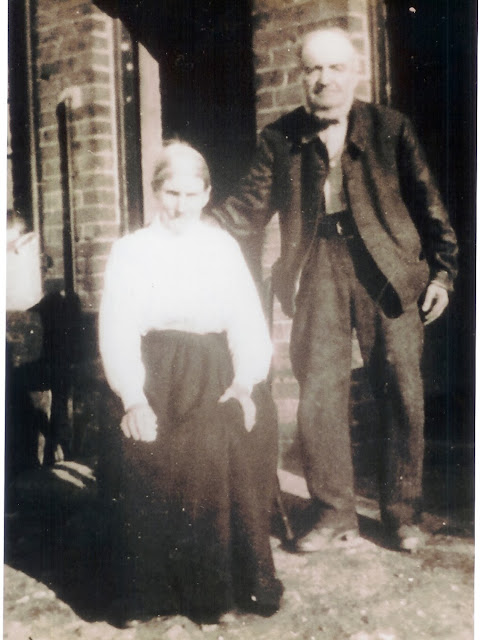 The picture is of my Great, Great Grandparents Henry Harris (1843-1929) and Caroline Harris nee Ellis (1844 -1935). This photograph was taken on the occasion of their 60th Wedding Anniversary in 1924 and was taken at Wanborough Surrey.

The photographer was my late Great Aunt, Rose Marshall nee Butcher (1900 - 1994). Caroline was apparently a bit of a stickler and though nothing of smacking her Grandchildren if they misbehaved, whilst Henry was a "sweet old thing" according to my Aunt. I asked if she could recall an example. This is from my journal what she told me back in 1990 -

"Old Sam Marshall came across to tell Mum (Annie Prudence Butcher nee Harris) that the Boys (Dick, George (my Grandfather), Arthur & Harry) had been scrumping again from the apple tree."

When I asked what happened to the boys -

"The boys came home, all sweetness and light and Mum asked where they had been? They were vague and said the fields. When Mum asked if they had been over to Sam Marshall's they said they might have been. Mum, was not deterred. I wish you boys wouldn't. Do it again and you will get what for. What did you do with the apples? Oh we ate them was the reply, then one of the boys said, why do you want us to get you some? I don't recall which of them said that, but they were all sent outside. Later they came in for tea and Harry said he was sore, when Mum asked why he said Granny. Old Grandpa was listening in, he shook his head and said but those apples are nice, aren't they?"

The background is the Sam Marshall was a local farmer, and was in fact related to Caroline through marriage. Her sister Maryanne married Jim Marshall, the added complication was that the Marshall family were already connected to the family prior to that marriage and things were further complicated when in 1931 Rose married Maryanne's Grandson Ernest.  Something that Caroline disapproved of and my Aunt always vehemently denied.