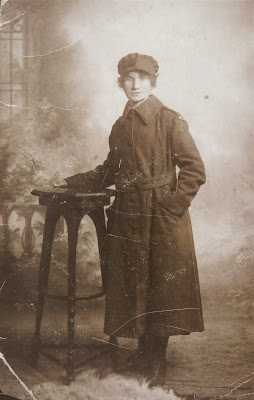 My grandmother, Lillian Edith MATTHEWS inherited her middle name from her Aunt, the sister of her father, Edith Annie Matthews born 1877 in Rugby Warwickshire. Despite this my Grandmother knew very little about Edith other than she was a "nurse". My Grandmother never remembers seeing her. Research shows that the miles between my Grandmother's family and that of Edith were not great, yet there appears to have been little communication between Edith and her brother.

I had inherited a few photographs of Edith, this photograph of her in a type of military uniform, and another two photos of Edith with her children, the first with an older boy and girl and the second photo of the same two children with a young baby. That confirmed that Edith did indeed marry and have a family.

I turned at first to the military style photograph. Edith would have been too old to have been especially active during the Great War 1914-1918, so I pondered on the Boer War. Family history indicated that Edith was a nurse, so I researched the various avenues available. Edith Matthews had never been a nurse, but perhaps was a Voluntary Aid Detachment (VAD)?

I put the nurse aspect on the backburner for a while and instead sought Edith’s marriage certificate.

I eventually found it at Holy Trinity Guildford in 1902 where Edith married a Charles JELLEY. I was delighted, what a fun surname! It was not going to be too difficult to research Edith’s new family….or was it?

As soon as the 1911 Census was available to search I did. The search revealed that she was, in Redhill Surrey with her husband, two children Charles and a daughter Edith Mabel and her father, John Matthews who was recorded as a boarder.

I did a search of a death certificate for John Matthews. I found him in the Redhill registration district for 1927 residing at St Johns, Redhill although his place of residence was at 114 Walnut Tree Close, in Guildford. This was an address I was very familiar with as my Grandmother had been born there in 1912. The informant was a G. A. Read, occupier. Why was the death not recorded by Edith?
So, it would appear that Edith and my Grandmother's father, also called John must have had some communication in regard to their father. John senior did according to my Grandmother live with them in Guildford, and like many families my Great Grandmother had in law problems and referred to her father in law as a dirty old man. I guess that he suffered from various conditions that affect elderly gentlemen!

I searched the online facility of FreeBMD to see if there had been other children born to Edith and Charles. None were found, but I found a death for Edith Jelley in the June Quarter of 1921 just aged 40 years. I felt such a wave of emotion. Here was Edith's death. I sent off for the certificate hoping that I had found another Edith Jelley, alas no, the certificate arrived. Edith Annie Jelley aged 40 years, wife of Charles Jelley a restaurant manager of 13 Malbern Road Kilburn. The death recorded by E. HARRISON sister in law who had been present at her death.

I may never know anymore about Edith, although there are lots more questions about their time in London, what happened to their children, although I have managed to trace the grand daughter of Edith's son. How did Charles become a restaurant manager, just to name a few.

I suspect that Edith was a VAD and helped to nurse Charles back to health. They lived next door to one another, a fact gleaned from their wedding certificate and were friendly faces to each other and I would like to think that potentially a romance blossomed as they married in April 1902 and Charles was discharged in June of the same year.

Whilst I can not at this time establish anymore about Edith and her time "nursing", she does deserve to be recognised for the contribution she and others like her made during the Boer War and the First World War.