If you want to hear about the contest. The watch this week's Monday with Myrt - the details are at the top of the hour. Here is the video - be quick though the contest ends 30th November 2013!

As part of the discussion, DearMyrt (+DearMYRTLE )  talked about milk. I shared an early memory about visiting the milk depot with my Grandmother, where she had called in to see my Grandfather, who worked for Unigate Dairies at Guildford. I relived that moment - the smell of the milk, the noise of the machinery and the milk bottles clanking together as they moved on the conveyor belt. I can still remember that smell of milk, as if it was yesterday and even now dislike milk, and especially warm milk. 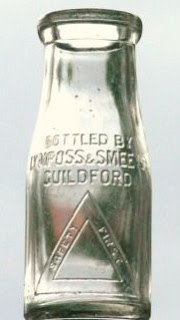 My Grandfather worked for Lymposs & Smee diary, who were a well known Guildford based company. The picture here, shows an early milk bottle from the company, this dates to around 1930.

After my Grandfather returned from military service in 1946 he returned to Lymposs & Smee. The company itself did not fair especially well. as they
went into Voluntary Liquidation in 1955 and from what I have been able to establish were acquired by the Home Counties Dairies, which effectively became part of Unigate.

Unigate themselves was the result of a merger between United Dairies and Cow and Gate who were another well know Guildford business.

Here is the Voluntary Liquidation notice from the London Gazette 22nd April 1955.

"LYMPOSS and SMEE Limited.
(In Voluntary Liquidation.)
NOTICE is hereby given, in pursuance of sections 290 and 341 (1) (b) of the Companies Act, 1948,that a General Meeting of the above-named Company will be held at Central Buildings, Guildford, on Tuesday the 24th May, at 2.30 p.m. for the purpose of having an account laid before the Members showing the manner in which the winding-up has been conducted and the property of the Company disposed of, and also of determining by Extraordinary Resolution the manner in which the books, accounts and documents of the Company and of the Liquidator shall be disposed of. A Member entitled to attend and vote at the above Meeting may appoint a proxy or proxies to attend and vote instead of him. A proxy need not be a Member of the Company.—Dated this 19th day of April, 1955. (255) G. M. LYALL, Liquidator."

Since last week, I have often thought of that early memory and today, whilst Mum was here asked her what else she could recall, and through the course of the conversation, she suddenly announced that sometimes on his day off, he would take Mum to work with him, when he called in to see his colleagues. This would have been the early 1950's. Mum then relived that memory of the noise and the smell of milk. How wonderful is that?

At this time, it was traditional to have a job for life; and after 25 years to be given a watch by the employer. Those days of long gone, but as my Grandfather approached 25 years of service, Unigate changed the rules and made it 30 years. Well he achieved that and was presented with the watch; a watch that I now have. Just after he was awarded with his watch they changed the rules and reduced the time period back down to 25 years..

When he first started working at the dairy, he worked in the dock area. This was where the vehicles that had collected the milk from the farms would be. The milk was in churns and it was tipped into a devise that processed the milk to make to fit for human consumption. He then moved onto the bottling section. Here is where the processed milk was obviously bottled. His job was to ensure that the bottles were filled and aligned properly ready for capping and then moved into crates before being dispatched with the milkman for delivery the next day. At the time of his official retirement in March 1973 he was a foreman, making sure that the chaps worked and went for lunch at the right time and so forth.

In March 1973, as he approached his 65th birthday and retirement, he was asked if he would stay on a few months and work to cover another foreman's shifts as that chap was sick. My Grandfather agreed and then worked in part of the business called "the dump".

The dump was where the fresh and clean bottles would arrive all wrapped in plastic. Here they would be processed - sterilised and cleaned before being sent across to the main dairy building. He worked here with another chap, whose name Mum can not remember, but like my Grandfather he was about to retire. My Grandmother always maintained that there was something about the plastic that had caused some issues, as for some reasons's cigarettes that were lit in the general area would frequently go out and the plastic had a "funny smell". Whatever ever the issue this chap and my Grandfather both passed away on the same day - 20th July 1974, my Grandfather at 9am and this chap at 9pm, both of lung cancer. Curious.

Whilst Mum could not recall the name of other man who passed away she could recall some of the colleagues:


The Roots of Lymposs & Smee, go back further than the 1930's as this picture shows. 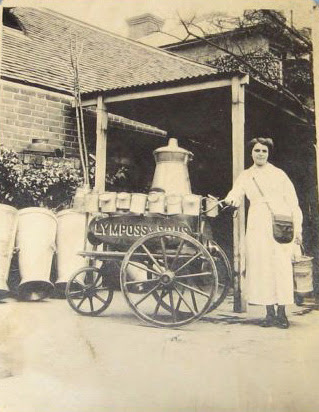 Here they are referred to as Lymposs and Son.

This firm operated from two dairies in Guildford, addresses at High Street and Woodbridge Road. Lymposs and Son eventually merged with another diary to create Lymposs and Smee.

The address of Woodbridge Road was still connected to Unigate in the early 1970's as this where the location of "the dump" was.

So, from a question posed by someone several thousand miles away it triggered a memory that I had and a memory, almost identical to mine, that my Mum had. I had already done some research into Lymposs and Smee as part of my Guildford and District collection and as part of my understanding of my Grandfather's early life and war years, which you can read on George's War.
Posted by Julie Goucher at 1:44 pm