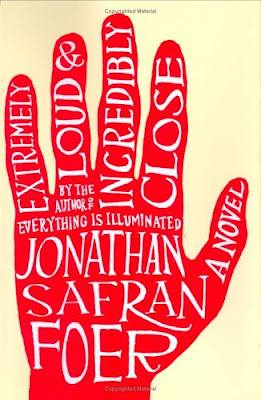 A few months ago whilst channel flicking for a movie we spotted Extremely Loud and Incredibly Close. Now we had never heard of the film, but as we watched we felt that it must be based upon a book. A quick google search and it revealed that we we right.

The next time I was in the library I selected the book and this review is of the book rather than the film, which was just as enjoyable.

Oskar is a young 9 year old boy, is the narrator for the story and the story is set in New York and is about Oskar, his family and a group of strangers that he meets along the way whilst attempting to unravel a mystery set by his father. His father died in New York, a victim of 9/11.

The relationship that Oskar has with his father was a special one. Oskar is a bright lad, very literal and probably features somewhere on the autistic scale.  He lives with his mother who has eventually moved on with her life. His Grandmother lives next door alone, as her husband had left her previously.

Oscar come across a key in a vase with it a name. Oscar seeks to discover the details of the name and spends hours each weekend seeking people with the name using the New York phoned book.

I loved this film and the book. The storyline was fascinating as Oskar strives to hold on to his deceased father and those phone messages that he heard on the answerphone tape. The messages of a loved one to a family, left incase the unthinkable happened.

There is a sweet kind of innocence as Oskar seeks to uncover the answers and whilst he is doing so the memory of his father is "alive" upon gaining the answers Oskar has to find a way of dealing with the acceptance that his beloved father is gone and an important chapter of his life closes.

I have to say that whilst I read the book I struggled with the writing. Watching the film first did actually help to read the book and I can see from the reviews online that the book itself has received mixed review and several people also read the book following having seen the film. The film incidentally was tastefully produced and the deceased father played by Tom Hanks, who does a great job.

This is one of those books that you have to reflect on; and seek the deeper meaning. Striving to understand a huge amount of emotion and the complexities of dealing with survivors guilt.
Posted by Julie Goucher at 12:03 pm