Week 10: Disasters. Did you experience any natural disasters in your lifetime?
Tell us about them. If not, then discuss these events that happened to parents, grandparents or others in your family.
This challenge runs from Saturday March 5 through until Friday 12 March 2011
In the grand scheme of things disaster means different things to different people. The recent floods, cyclones in Australia, the dreadful bush fires of previous years in Australia and of course the very recent earthquake in New Zealand.
I have been lucky, I have not been really affected by any of those recent disasters, although I do have family in Australia they were not affected by the floods, by their homes and lives threatened.
In September 1968 the River Wey in Guildford burst its banks. Mum says they heard a noise one Sunday evening and she went to the door to look out. She told her Dad there was water in the road, and the response was, as one might expect, "Don't be ridiculous!" My Grandfather then went to the back door and sure enough the water was just coming in the door.
The family then worked steadily trying to get what they could upstairs, but essentially it was really too late for some items. On the Monday morning, Mum and her Dad went into Guildford to get some wellington boots, by that point it was impassible in some parts of town, but they did get the wellingtons and some bread and other essentials. By Lunchtime on Monday the water was well and truly inside the properties and the lower section of Guildford closed off, and the water continued to rise rapidly.
There was at the time an Army barracks in Guildford and they helped to evacuate those worse affected. My Grandparents elected to stay in their home. By Tuesday morning the water had all gone, but a dreadful smell and clean up now existed.
My Mum at the time worked at the department store in Guildford, Plummer Rodis, which was situated also along the banks of the River and the store was also flooded. Mum recalls the Managing Director, a Mr Brown, coming to talk to the staff, thanking them for all their hard work during, what would have been a challenging clean up operation and costly to the business, regardless, as a way of thanking the staff he paid them all an extra week's wages. A far cry from working for a large business today.
Mum always says that my Grandmother was totally oblivious. On the Monday evening, Gran said she felt like a cup of tea. Anyway, Gran toddled off downstairs and it was a few minutes before my Grandfather realised that she had gone downstairs. They heard a small bang then a bit of an expletive and then eventually Gran came back up the stairs with a teapot and a set of cups and saucers. She had turned the gas on and made the tea, completely oblivious that she could have completely blown the house to pieces.
When I asked how high the water had come into the house, the response was the water had started to climb the stairs and had made it past the first three. It might have been a dreadful experience, but not totally unexpected given how close the house was to the river. The reason for the flood, was not due to excessive rain. but there was a problems with the locks which controlled the volume of water. 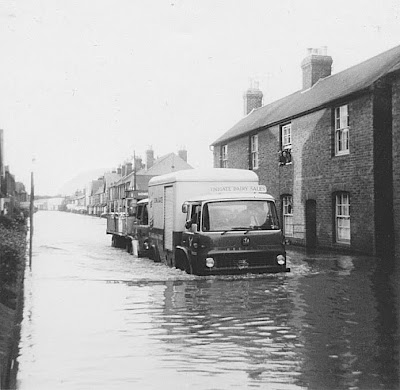 This photo was taken by Allen Edwards, whose mother in law lived across the road from my Grandparents. I have looked at this photograph lots of times as it shows the house,the first on the right where my Grandparents lived, but it was only today, when I was adding it to this post that I realised that the top window is open and has my Grandparents looking out and the bottom window has my Mum peeping outside.
Posted by Julie Goucher at 11:40 am