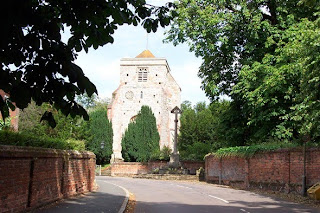 Even though I am not sure what the catalyst was for my starting to research my family history, the catalyst for my undertaking a One Place Study was seeing my Great Grandmother's name on the 1881 Census. I remember being so overwhelmed with emotion, here she was, just aged 2. I simply had to know all I could about the village which was embedded into my ancestry.
In the early stages I did like many of us, work back from known to unknown with fairly rapid speed. By the time I was back another two generations from Annie Harris I was firmly addicted and attached to both the parish of Puttenham and to the name of Budd, which I just love! There was even a Rose Budd in the family!
The Budd family were poor, the family featured consistently in the Poor Law Records for their illegitimate children! but regardless, they were part of my family and I felt something for their plight when I read it in the various documents. I wonder what they would make of the world now? These were women who were ridiculed for their "morals" and illegitimacy, yet look at the world today, where it is quite common for women to raise a family whilst unmarried or perhaps have offspring with more than one father. It is a complete turnaround, in what is a relative short space of time, given the history of mankind!
The village itself is a rural one; steeped in history and part of that history was the world occupied by the Curate Charles Kerry. Kerry originated from Derbyshire, yet he spent considerable time in the parish and kept a series of manuscript on the inhabitants of the village. These manuscripts were written at the time and often contained snippets of local history, hearsay & incidentals of village life, there are some parish records details for not just Puttenham but also neighbouring Compton parish and there are a series of pedigrees written at the time by Kerry with the help of those in the relevant family.
Here is the pedigree for the Budd & Strudwick family:

The pedigree contains such incidentals of life for example. There is a reference to William Budd putting his hand down a rabbit hole and being bitten by an Adder snake. The note also says that William put his finger in his mouth and then became a cripple for the rest of his life. I would not have known that from official records - William was born in 1731 in Puttenham, and is not recorded on the census records. There is also a note that Richard Budd who married Sarah Collins and is my direct line of descent had a fine tenor voice and sung in the choir. Another fact that I would have not know. These manuscripts have enabled me to see behind the dates that our ancestors create, and it is these facts that bring them alive and make them people rather than the written word. It is remarkable that the manuscripts survived. The originals were returned the Derbyshire Records Office where Kerry lived. How many more of these manuscripts are in the various parishes across the land, not just here in the UK, but also overseas? These documents were written when there was surely more important things to worry about, perhaps the next meal or the health of a parishioner, yet they were written and I am forever grateful for Charles Kerry.
Word count 576
Posted by Julie Goucher at 6:33 am