As modern women I believe we truly under estimate the hardship, suffering and resilience of our female ancestors. Let us consider what we have that they often did not.
How would we cope if we had to work 15 hours a day for a meagre wage? Yet our ancestors did and they, in some form or other survived otherwise we would not be here today. Women are often the backbone of the family, not from necessarily a financial aspect, although, in rural 18th and 19th Century England women would have worked in the fields too, and the children. Women tended to the men folk, looked after elderly relatives in a domestic sense, looked after the children and tended to the homes and organised the food requirements, making the money goes as far as it could. I believe that we underestimate the female ancestors we each have and perhaps judge them in comparison to modern standards.
What though, if you had been born into the middle and upper classes? You grew up being unable to provide for yourself in a domestic and financial manner. If we want a cup of tea we switch the kettle on and make it. In the 18th Century, depending on your financial standing you either rang a bell and someone made you the drink of your choice or you went to the well and obtained the water, perhaps carrying it and any young babes several miles, poured water into a pan of some kind and boiled it over a fire. Could you even afford tea?
As I have researched my own ancestry, I have developed an attachment to some of my ancestors, their contribution to my ancestry is, in some cases overwhelming. The first is Esther Bellasis, who has been the resent subject of an earlier post, and I will not reiterate that here in its entirety, except to say that Esther made a contribution to history that she herself probably never even considered.
Esther was born Ester King in 1770, the daughter of John King and Mary nee Budd. The whole story resembles that of Pride and Prejudice as John and Mary had a family of 10 children, 9 of whom were girls,and nearly all of them involved with the Honourable East India Company in some way. Esther married George Bridges Bellasis in 1796 in Calcutta India. George was known as the most "Handsome man in India" a fact gleaned from the book written about the Bellasis family called "An Honourable Company" by Margaret Bellasis published in 1952.
What has been established is that the girls went out to India in installments, as they became of age and they were dispatched to parts of the "Empire" in the care of the elder sisters. The story is that one of Esther's sisters was proposed to. The proposal was later retracted and a dual between the proposer and George Bridges Bellasis ensued. As a result George Bridges Bellasis was sent to Botany Bay for life for killing the proposer, having been transported on board the ship called "The Fly" in 1802. When he arrived in Sydney, George was immediately given a conditional pardon by Governor King and on 24 June 1803 received a Royal pardon as an "act of commiseration towards a gallant, but unfortunate officer and an afflicted dying wife".

I wondered about Ester. Just what had her life been like? Married to a well to do member of the HEIC, was she shamed because of the dual and subsequent outcome of that?, then transported like a common criminal? I wish I knew just what she thought and felt. I wondered just what research material had been left behind of the Bellasis time in Australia. George it is well documented as a military man in Australia and India, there is evidence that he was involved in the Freemason movement in the early days of the colony.

I did a search online for "Mrs Bellasis"+Australia and for variations of - Botany Bay, Ester Bellasis and was very surprised to find this painting. 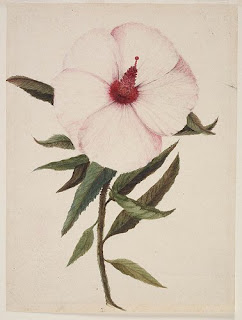 I sent off to the archive, The Mitchell Library, State Library for New South Wales, for a electronic copy and it is one of my genealogical treasures. What is especially wonderful is that the painting by Ester Bellasis is the earliest known piece of artwork by a woman in Australia, so it looks like Ester made her mark after all, which I find delightful, and this is what I meant when I said her contribution to history.
George and Ester returned to England in the early 1800s and Ester is commemorated at Puttenham Church having died in 1805 in Berkshire, at the Bellasis home. George returned to India and later remarried, to his deceased wife's sister, Elizabeth Kent nee King, herself a widow. George died in India in 1825 and the sister Elizabeth in Kent in 1837.
There is just something about that picture that I find soothing. Perhaps it is the fact that Esther was in some small way a women in her own right, in a small way an artist, a contribution to history that she would probably have never realised at the time. Did she get on the boat back to England and realise that the painting had been left behind, or did she intend to leave it far from home? We shall never know.
Do though, some of the characteristics and skills of our ancestors live on in us, two, three or even ten generations later? 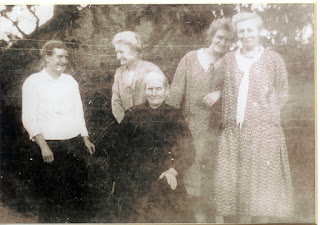 This is a photograph of one of my Maternal Great Grandmothers, Caroline Ellis nee Harris 1844 - 1935 with four of her daughters. My Great Grandmother, Annie Prudence Butcher nee Harris is the lady on the far left. Caroline was in her early 90s when she died, as was my Great Grandmother, and that tradition was followed by three of Annie's five daughters. Yes, people are living longer, but is that the only reason for longevity? Isn't there a chance that genetics, passed from one generation to another simply continue, as do expressions, gestures and a hosts of other things that we inherit from our relatives.
When I look at this photograph, which I was given, from the daughter of the lady second on the left, who also died in her mid 90s, I am struck by the time line of history. When Caroline was born Queen Victoria had been on the throne for 7 years, and when she died we were just 4 years away from the Second World War. For me that is a perspective. The changes that Caroline had experienced are remarkable and I can't help but wonder just what she would make of the 21st Century, with our lives of internet shopping and communication via the internet and telephone, What would she make of an iphone or an ipad for example. So much development in what is historically speaking a short space of time.
I hope, that my ancestors would be as proud of me, as I am of them and the contribution they made to my ancestry.
Posted by Julie Goucher at 9:59 pm