The NaBloPoMo word for August if Fiction and whilst, I don't always take part my thoughts turned to the fiction of my family history.

We have all inherited stories of our ancestry and very often by the time we research the facts of the story, the storyteller has passed away and all we are left with is a story which may or may not be true, or perhaps there is a grain of truth and much fiction. The details and stories we are told can be used as springboards for the truth of our ancestry and I don't believe we can ask for more.

Frequent readers of this blog will have seen that I have posted about our recent holiday to Jersey of which I am currently about half way through. Jersey is rich in history, and much focus is given to the "recent" history of the German Occupation during the Second World War. There are monuments and the Occupational Tapestry, the Underground Hospital and a whole host of other things that makes the Island history rich in terms of this part of its history.

As we wondered and explored the island my thoughts turned to my Grandparents during the Second World War, were they fearful, how did the emotions of it all affect their lives? Why did my Grandfather join up?, he could easily have found work on the farm that my family worked on. What of my Grandfather's time in Africa? Did he see, like many others the dreadfulness of Europe? Some of these questions will never be answered, as there is no one left to ask, and his service record does not give instant answers.

What I do know is that my Grandmother had evacuees during the War and worked at the Laundry in Guildford, which washed and dealt with the clothes of the military. There is very little documentation of the formed laundry at Guildford, although the derelict building wasn't demolished until the late 1980s I think, and now the Crown Court sit on the same site. If only the walls of that old building could have talked, what stories would they have shared? 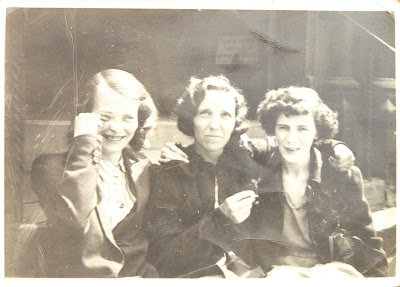 This photo is one of the ones that I have inherited, given to me by a cousin after my Grandmother passed away.  The cousin that had this photo was the daughter of my Grandmother's sister, so why did she have it? What did my Aunt do in the War? The photo shows my Grandmother in the middle, and two work colleagues from the laundry or two evacuees? There is no one left to ask, but I do know, because the photograph tells me on the back that one is called Eadie Greenaway, but which one?

For me, this is a combination of fact and fiction, and I believe that most of our ancestries can be like that. The stories we inherit are fiction, until we can prove them with evidence and then they become fact. Of course if we can't locate any evidence then we are always left wondering.......
Posted by Julie Goucher at 6:27 am