Here in the UK we don't celebrate Thanksgiving. We do, or we did when I was at school take part in Harvest Festivals.  For this Carnival of Genealogy are am going to do some imaging, based up the facts surrounding the amazing life of my husband's Great Grandmother.
Annie Rhodes was born in Bradford Yorkshire in 1869. In 1889 in Bradford she married Charles Worship and together they had three daughters, Emily, Florence and Lilian, my husband's Grandmother. Over the course of the last 5 years or so I have researched the Rhodes and Worship family and you can read about it in an earlier post HERE. In 1905, Annie Worship, although recorded as Wurship, boarded a ship to the United States; with her was a new baby, a son, that had been born in Bradford.
When Annie got off the boat, in Philadelphia she became known as Annie Hindle as did the baby. Her divorce from Charles Worship did not take place until 1921 and her eventual marriage to Harry Hindle in New York in 1922. From what I can understand, Annie had a relationship with Harry in England and then became pregnant. She left her husband and migrated to America following her new love. Upon arrival she took Harry's name, but it would be 16 years before they could marry.
As the ship from England had arrived a year earlier just after Thanksgiving, it would not be until 1906 when Annie & Harry with their son Henry would celebrate Thanksgiving.  It appears that Annie and Harry embraced their new life in a new Country. I am imagining that they sat down to dinner together, perhaps with new friends and celebrated the weekend. While the turkey or duck was in the oven did Annie quickly whisk up some batter and make Yorkshire Puddings to accompany their dinner? And as she did so, did her thoughts turn to her children left behind in Yorkshire?
After dinner, was there some board games, or perhaps laughing and jokes?  Did Annie, in the midst of those celebrations turn her thoughts to England to her three daughters that she had left behind? Did she feel a little bit of regret? Would any of us make a different decision? Remembering that this is the early 20th Century. Views of living as a married couple when married to another would have been severely frowned upon. Abandoning her children likewise. It is so easy for us to view things through modern eyes. Annie made a huge and very difficult decision.
These are questions that we will never know the answer too. My late father in law had a series of photos and we videoed them in the mid 1990s. I have since transferred those images to DVD, but very little of their life in America has passed to us. What has happened is that I made contact with someone who was the step son Annie and Harry's son. He very kindly provided me with some details and the very special image below, the only photograph that we have of Annie & Harry Hindle and their son Henry Rhodes Hindle.

Taking part in the Carnival of Genealogy, hosted by Jasia. 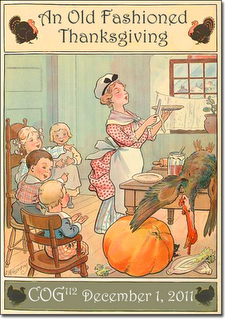 Posted by Julie Goucher at 4:54 pm