Description of the Island of St. Helena

Written by an Officer in the Honourable East India Company and published in The News on Sunday 13th August 1815.

Description of the Island of St Helena
Rugged rocks and lofty mountains,
Interspers'd with crystal fountains,
Here and there a grove of trees,
Are all the wandering stranger sees;
The tradesmen, imitating fops,
With heads as empty as their shops;
The girls, drest out from top to toe,
Like painted dolls in puppet-show;
Unsocial wretches here reside,
Alike their poverty and pride,
Throughout this Isle, there's scarce a creature
With either breeding, or good nature:
For rugged rocks, and barren fields,
Are all that St. Helena yields*.
*Except an abundance of water-cresses and plenty of fish.


A truly lovely poem, representing the Island of St Helena and the life of a distant ancestor; George Hutchins Bellasis.


George was an Officer in the Honourable East India Company. Following a period of illness he was destined to return to England. Whilst on the ship back to England he became unwell and the ship docked at St. Helena. George Hutchins Bellasis remained on the island for 8 months recuperating. While living on the Island he captured the island in a series of watercolours. Once he had returned to England the series of watercolours were published in 1815. 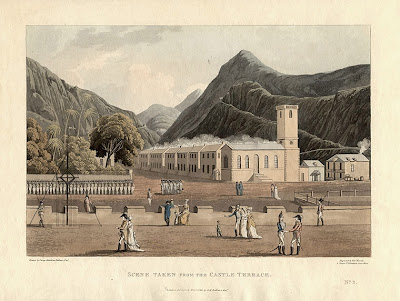 Posted by Julie Goucher at 4:25 pm