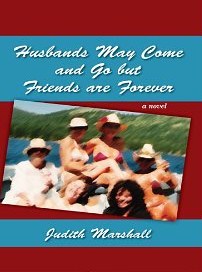 Cover Picture above courtesy of Amazon
This is the book that I read in support of Adopt an Indie Month.
The book is set in the Spring of 2000 and centres around a group of women who have been friends for almost "forever" Each are caught up with their own lives, loves, fears and challenges and the initial scene opens with divorcee Liz as she prepares a redundancy package for a group of employees. The redundancies due to a business merger and Liz fails to see that just perhaps her own position is about to be removed. Having had a tough & emotional day with the redundancies, Liz is taken to dinner by her partner, Sam. Over dinner he announces that he has been offered promotion and would Liz go with him. Liz hides behind her children, now all grown up and her work and does not feel that she can commit to such a move.
Very shortly after, Liz is told that of her own redundancy; and takes the news badly. She turns to one of her closest friends Karen, a twice married and currently single women. Karen is a complex character. Brave and yet frightened, she is the pivotal character in the book with what unfolds next and as the story develops we see how the group of middle aged women pull together as they battle through a tragedy. I am not going to say any more about the storyline, which takes the reader on a journey of discovery, both in terms of what happens next and in terms of flashes of history between the women.
What I loved about this book was the realness of the storyline. We can probably all identify with friendships that are almost institution's in our lives. Friends with whom you can have fun with, a fierce debate with, turn to in times of heartache and worry, regardless of the time and distance. These are the friendships that mean you can start a conversation on one day and finish it months later. These friendships are the backbone of who we are as individuals and in many ways they are just as important as family.
Essentially, this is a book of love, friendship and self discovery and I highly recommend it.
I was provided by the author with an eBook, and was not encouraged or pressured to write a favourable review. The review above is based upon my own opinion having read the book.