Before we head into 2012 I had best quickly post about our Christmas. Alf's is HERE.

We had a quiet one, with hubby working over Christmas. Not sure if it was lucky or not, but he worked nights so spent most of Christmas Eve, Christmas Day and Boxing Day in bed.

We had a hearty breakfast about 9.30 on Christmas morning, which gave hubby a few hours sleep before eating. We then opened the presents - here is a quick photo of mine! 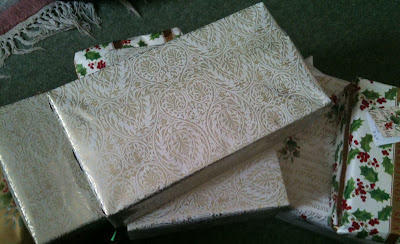 Hubby headed off back to bed until 4pm when I woke him for lunch. We usually eat about 1.30pm on Christmas Day, so the whole day felt a bit odd to me. Hubby had of course snoozed the majority of the day away which was a shame, but I did get to operate the remote control for the television, it is simply a shame that I can not get the sound through the Blu Ray player system. Whatever happened to just using the television  speakers?....

I did watch The Queen's Speech, which was broadcast for the first year on Sky News, my favourite news channel.

One of my wonderful packages contained a Kindle and I see from Amazon that the manuscripts of the Queen's Christmas Message for 1952-2010 and 2011 has been released, free of charge, by The Monarchy.
There was some wonderful books in the other packages, courtesy of my Mum, as hubby I think gets pretty fed up with my head in a book, of course by buying a Kindle he has simply swapped one reading medium for another! Perhaps there are some fishing books for Kindle I can tempt him with?
Posted by Julie Goucher at 3:52 pm