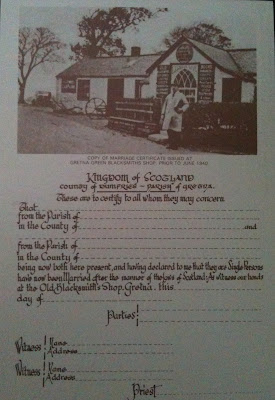 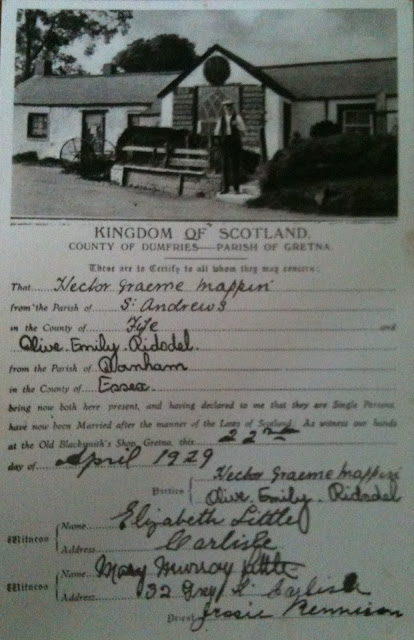 I have visited Gretna Green a number of times and the modern shopping complex that is nearby. At the shop close by to the marriage chapel you can purchase these blank cards. The first card is around 10 years old. You can still get married at Gretna, my Nephew did a few years ago.
Then quite recently I spotted the second card and was immediately intrigued. Was this a case of young forbidden love, rushing across the border to tie the knot? The genealogist in me had to have a little poke about to see if I could identify anything about this couple. I know, but I could not help it!
A search of Ancestry.co.uk revealed that the couple Olive Emily RIDSDEL and Hector Graeme MAPPIN married in Billericay Essex in the June Quarter of 1929. Which implies that the couple married in Scotland at Gretna in April and married again in Essex in England in June of the same year. I say married in Scotland on the basis that this feels a little more than a young romantic gesture as the card indicates witnesses and the name of the priest was completed and is shown to be Jessie Rennison. Was one of the couple, or perhaps both, under age in England, but free to marry in Scotland in April then the individual had a birthday and was then of age to marry in England. Was perhaps Hector in the services and stationed in Scotland? I comment on this because it was quite common for servicemen to marry twice, as they had to have the permission of their commanding officer.
A look at the 1911 Census reveals the following and does show that in 1929 Olive would have been 20 and therefore under age to have married. It also reveals that her parents had been married for 5 years at the time of the 1911 Census.

I wondered where Olive's father was going to be in the 1901 Census. With a distinctive name he was fairly easy to find and was in 1901 located in London, is a boarder with a Salvation Army family and himself is recorded as an Salvation Army Officer and is aged 19 years.
A further search revealed that Ernest married Lilian Ethel Spencer in 1906 which is confirmed by the 1911 Census details. Usually the Spouses last name is not given for marriages prior to 1912, but a search does reveal that the surname of his bride is Spencer.

In order to be consistent I had a quick look for Lilian Ethel Spencer in the 1901 Census and here she is with her parents and siblings. There was no obvious signs if Lilian's family were also involved in the Salvation Army, but her father had a business in Yorkshire.
The research which reveals that there is an Salvation Army influence may well be one of the root causes of why there was two marriages, plus the additional issue that Olive was just under the official age limit to marry freely. I wonder if her parents knew that she had married prior to the event in Essex? A quick glimpse reveals that they at least had one daughter born in 1930 and a son a few years later.
I am going to enjoy the card for a little while, before seeing if I can reunite the card with the family. I did a quick Google search to see if that revealed any one researching the family or linked directly to the family. I was therefore very surprised to see the following newspaper article from the Singapore Newspaper, The Straits Times 22nd May 1929
There was a further newspaper article in the Miami Post for 8th July 1929, which shows an earlier link between the families, and the rather fun personalities of the pair.
What a wonderful and romantic story.
....And all this from a postcard!

Posted by Julie Goucher at 1:03 pm