I am again delighted to take part in the 2011 Virtual Advent Tour hosted by Marg & Kelly. This is my first year of taking part and I am hoping that it won't be the last. It is a wonderful way to meet other bloggers and spread festive cheer! When I decided to take part I selected two special dates - this is the second of those two dates.You can read the first post, 18th December HERE.

Today is my husband's birthday. The sort that end in a zero! Buying a gift is always tricky, just a few days before Christmas all the suitable ideas have usually become Christmas presents. I wanted to mark the occasion in a special way. So, being incapacitated at the moment, wandering around the shops was not an option.

I was then delighted to see an advert for a distillery that produces and decants whisky, a favourite tipple, (although not too often!) into bottles with a nice personalised label. Now, I do not know the first thing about whisky, but a quick search of Google revealed that this was a well known company with a long history. So, I went ahead and ordered the bottle. It arrived in a superb presentation box.

I also ordered from another company here in the UK, a personalised mug. With the name on the front and on the bottom the dates. Which I think are a lovely way to commemorate a special day in hubby's life. I usually purchase his birthday card much earlier in the year. I find that regular cards are reduced in stock to make way for the rows and rows of Christmas cards. So, earlier in the year I ordered and paid for a personalised card which should arrive in good time. A former colleague made me a lovely cake which was delivered early this morning.

As some readers will know, my husband grew up in the Scottish border town of Lockerbie. I remember when we first met and he told me where his parents lived, the first thing I said was ah, the town of the air disaster.

On the 21st December 1988, Pan Am Flight 103 was the victim of terrorist activity and as a result, all on board lost their lives. What is often forgotten is that as the plane crashed to the ground, some locals were also killed. A road and several houses were completely demolished. Now a park resides on that spot. The main fuselage landed just outside the small hamlet of Bankshill. This small hamlet is where my husband's family lived at the time. Thankfully, none of them were hurt. The local parish church at Tundergarth has a memorial room and a book of remembrance. Just on the outskirts of Lockerbie, at the local cemetery is a full memorial. It names each of the passengers and crew on the plane and there is a further memorial that names the locals, which included a friend of my husband.

Such an event rocked the entire World, and as one would expect the events of that day dominated the news and newspapers for several weeks, and of course in recent years there has been further mention of the event and the links to the politics of the Countries involved.

Whenever, we head to Lockerbie, we always visit the memorial and pay our silent respects and this plaque says it all - that even in tragedy we can be united. 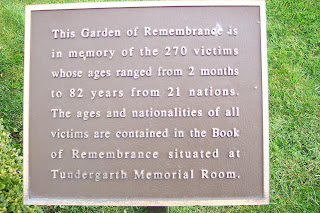 For those interested further, photographs of the various plaques connected to the disaster at Lockerbie can be seen at Grave Encounters.

Whilst, I end on a rather sad note, there is joy as this is the festive season and for a very special man, today is his very special day. Happy Birthday Stuart!