Back in October I started a project entitled Guildford and District. Based loosely on an earlier shelved project. This postcard can also be seen over on that site, with quite a few others already posted and more to come!
This postcard intrigued me. It was not just about the view, which is always lovely to see, but it is about the people who sent the card and the journey they were physically on, its about the message they sent and the person they sent it to. So many questions...... 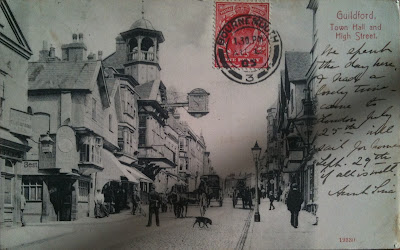 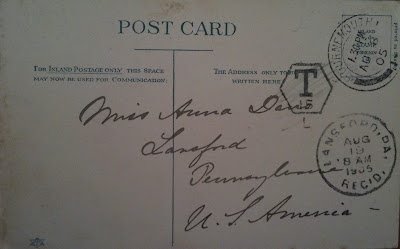 The Message
"We spent the day here & had a lovely time - came to London July 25th will sail for home Sept 29th if all is well. Aunt Lina (or Ina)."

The Research
I searched the nearest US Census to the postage date which was 1910. The census revealed for Lansford, Carbon County a William S Davis aged 44 years. Born in Wales. He migrated to the US in 1869. His occupation is described as a foreman in a coal mine. Residing with him with was Ella Davis his wife aged 41 years who was born in PA and a daughter Anna aged 19 years, born in PA and a further two children - Ada aged 13 years and William aged 7 years. Both born in PA. The formal address was Banks, Carbon Pennsylvania.

I stepped back to 1900 and looked at the Census again. The were recorded as Banks, Carbon, Pennsylvania  and William and wife Ella are described as being married for 11 years, making a marriage circa 1889. The household consists of William's mother Annie Davis aged 61 years and born in Wales, William S is recorded as aged 35 years, Ella aged 31 years, Annie S is aged 10 years and Ada is aged 3 years.

So that is as far as I have researched. Perhaps someone with a connection to the family will step forward? Are there any records of Lena's trip? Would descendants like the postcard?