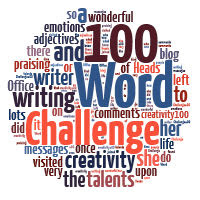 Joining the weekly 100 words challenge for Grown ups. This week the prompt is to use the following prompt, which is 8 words long in addition to the permitted 100 words.

His legs were moving as fast as they could carry him. Rushing about, trampling over branches and moss. He occasionally stumbled and then succumbed to the temptation of a mouthful of the carrot he was carrying. As he chewed the wonderful tasting carrot he slowed down then suddenly increased his pace as he remembered.
It was a vicious circle, he rushed, then tripped, had a mouthful of carrot, slowed down, suddenly remembered then picked up speed, so much so that he fell over his own feet and became quite dishevelled. What a sight he looked.
observed and could not help wondering, what was the rabbit late for.
Taking part in the 100 word Challenge for Grown Ups – Week #36
Posted by Julie Goucher at 8:12 pm