V is for...... Victory
Today is ANZAC Day. The day when Australians and New Zealanders come together in a day of National Remembrance for those Australians and New Zealanders who died during armed conflict. I took part in an ANZAC Day challenge in 2011 and you can read that post HERE and view the 2012 post HERE.
Advertising posters, appealing to the Australian population to become involved in the War effort. 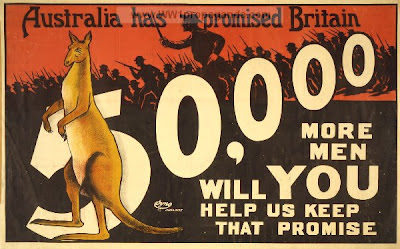 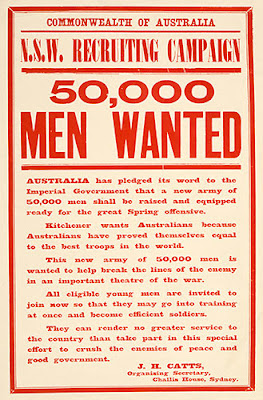 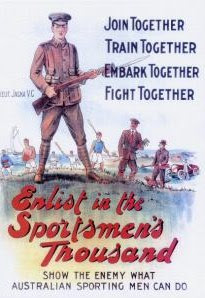 Of course, having joined up nothing prepared the men for the horrors of the trenches. There was no preparation of coping with flashbacks and re-occurrences of shell shock and other medical complaints once they returned home; if indeed they did. Many, many men paid the ultimate sacrifice.
Victory comes, but at a heavy price.
Further posts written for the ANZAC Challenge can be found:
Review of TransTasman ANZAC Blog Challenge 2011 - A great collection of posts and links to explore.
ANZAC Day Blog Challenge 2012 - A great collection of posts for this year and more links.
Post written by Pauline, my A-Z & Geneablogger buddy - HERE
Lest We Forget.
Posted by Julie Goucher at 1:28 pm