Welcome to Desiree Finkbeiner, as today we are taking part in the Morning Star (Book 1 in the Ethos Series) Book Tour. Congratulations on the publication of Morning Star. 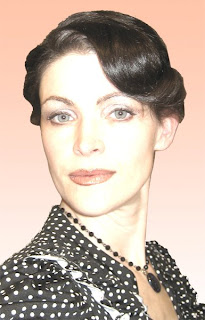 Desiree Finkbeiner attained a bachelor's degree in Graphic Design from Missouri Southern State University (2006) with a heavy background in business, marketing, music and fine art-- She was heavily involved in campus affairs and served actively in several committees focusing on campus entertainment and events.
She performed with musical acts/bands in rock and electronic genres, released seven studio albums, performed in 11 states and has written hundreds of songs. Her band, Carbon Star, was a finalist for VH1's "Bands on the Run" reality TV show in 2000. Then she performed with Pointy Teeth until finally leaving the music industry for the quiet life.
She had a scholarship for acting in college though she was not a theater major. Although she no longer performs or focuses on musical/performing arts, she has chosen to shift her talents to other areas that are more conducive to raising a family.
Continuing education is a constant adventure for Desiree with topics of interest ranging from civil and corporate law, history, political conspiracy, homeopathic medicine and spiritual healing. She prefers to read non-fiction, especially on topics that educate and broaden her perspectives on controversial issues.
With thousands of completed art works in her archives, most of which appear in private collections worldwide, Desiree hopes to focus more on publishing, marketing and licensing her work so she can leave a legacy behind.


Where does your inspiration come from?
Inspiration comes from so many sources, but I mostly rely on God to plant the story in my mind. I believe the source of all good things comes from a higher power, so why not rely on that source to inspire? If relied on my own understanding to try and write a book, it would be a total flop. But if I allow myself to be a conduit through which God can speak, I know I will always be able to write something worth reading.
Do you have any other projects in the works?
In addition to completing the Ethos series, I’m working on art for the special edition print version of the book. It will be a half-graphic novel of sorts. I’m also working on a steampunk YA series set for release next year. There is also an audio book in production for Ethos.
How do you deal with rejection letters?
Very well, I have a pretty thick skin. I was especially thankful for publishers that were nice enough to give me some feedback as to why they rejected my work. Constructive criticism is an opportunity to improve, and I have taken to heart every comment that has helped me become a better writer.
Is there anything you find particularly challenging about writing?

In a series with a complex plot like Ethos, sometimes it can be a challenge keeping my fictional ‘facts’ straight. There have been times I had to rewrite entire chapters when I make a mistake in the plot or a character mistakenly reveals something too early in the story for it to be effective. Since the Ethos series is written in first person, I don’t have the luxury of simple narration. Every fact that comes to light has to be introduced to the reader through the characters. So my character development is vital for the story to come together.