As I type this Alfie is snoozing in the arm chair in my study and was not impressed when I snapped him with my iPhone.

The last few nights have been dreadful. I am no longer sleepy because of the pain killers and for the second night on the trot have slept very little. Last Monday I was still awake at 4am. Then on Tuesday night I managed to get to bed and off to sleep only to be awakened by the house alarm. It appears that I had not closed one of the internal doors downstairs and Alfie had wondered off and gone through the opened door. So, it's my own fault! The rest of the week carried on the same.

On Saturday, Hubby looked out of our bedroom window and called to me where were his binoculars? I could just about remember where I had last seen them. I asked why and after manoeuvring the stairs I could see what had caught his attention. 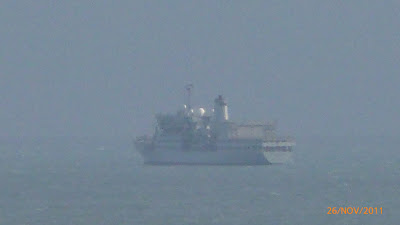 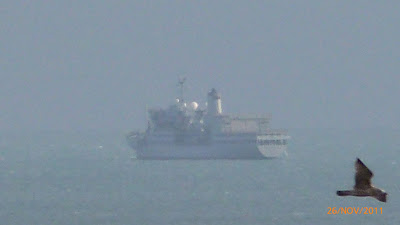 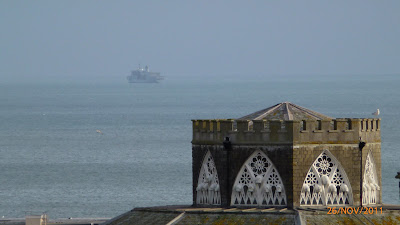 When I asked what boat it was, I was informed of three things.
1. Boats have oars and this does not, therefore it is a ship!
2. It is a Royal Navy Auxiliary vessel, which means it is a supply ship and heading off to replenish other vessels - perhaps Libya direction, but could be heading anywhere!
3.This Vessel probably began its journey at Plymouth.

If I see anything in the local paper - which is next out on Thursday I will let you know. In the meantime, did you spot the pesky seagull in the second photo? The third photo with the Church in is my favourite.

Inspired by the sunshine I floated the idea past hubby that perhaps we could nip to the supermarket as I had seen a fabulous recipe and wanted to try it out. The one thing we didn't have in the freezer was any chicken portions. So, we went off to Tesco. I am still walking very slow and can confirm, that there are individuals of all ages that are rude, aggressive and have no patience with those who are less mobile. Sad to say, I didn't see anyone get their punishment with a severe spillage of beef gravy like last week, but did see both some strange and odd people and behaviour. I do love people watching; much to hubby's disgust.

The best Tesco offering I can present this week is I was at the chicken counter, for said recipe and an Italian couple in their mid to late 50s were stating that I was a pain being so slow and perhaps I should have my groceries delivered. I loved the look on their faces when I answered them in their native language that I was sorry I was such an inconvenience and they should be glad they were not married to me, as my husband would confirm that I am a very bad patient. As to having my groceries delivered, I would never have met them had that been the case. To which I ambled off. I am getting more and more like a cross between my beloved Grandmother who spoke her mind and Victor Meldrew.

The second offering was as I slumped in the queue, I still can not stand as the pain radiates down my left leg, I noticed a member of staff who had finished her shift, and was now about to do her own shopping reach behind the till service area and extract a rather large basket with half her groceries in. The manager in me wanted to challenge - after all, she was there to work, the grumpy customer in me wonders if she could do my shopping for me in advance?

By the time we got home an hour or so later, I was exhausted, and did manage a nap. The chicken dish was wonderful and I managed to cook it yesterday. It took about 5 minutes to prepare and the slow cooker did the rest. Hubby was delighted that he was not having a jacket potato or omelette's, which has been the heights of cooking for the last few weeks.

So long, until the next rambling.
Posted by Julie Goucher at 8:16 am