Ancestor of the week - George Butcher

r 1908 - 1974. Born the son of Charles Butcher and Annie Prudence Harris, who is often known in my research notes as APH! George was one of 12 children, of whom only 9 survived into adulthood.
George worked I believe fairly extensively upon the farm where all his brothers worked, Manor Farm at Guildford. For those that know the area, the land is now occupied by the University of Surrey! During the Second World War my Grandfather served in the Army, having joined up in 1940. Now why he did this is a complete mystery. By then he was living with my Grandmother, they having married in November 1939 at the address in Walnut Tree Close mentioned in an earlier post and working for Unigate Dairies. I always wondered if he can be called up, but no his service record reveals that he volunteered to serve his Country and that makes me very, very proud. He could so easily have gone back to the farm and worked alongside his brothers.
I had always wanted to find out more of his Military life. The photo above was taken probably in Africa where he served during the War. On the reverse it simply says "Your loved one, George X" Such a simple photo, yet I know my Grandmother treasured it, as do I now.
My Grandfather returned to Guildford after the war and didn't discuss his war time efforts. After his death in the 1970s all that remained was a few photos, a square coin in a small leather purse that I had been given as a child, a box housing his four medals and a piece of material with embroidered corners, his efforts to fill any spare time and his pay book.
I still have the coin in the leather purse and about ten years ago I had both the medals and embroidery framed professionally. These both hang in their frames upon my landing where I see and admire them everyday and like so many of us feel very proud. 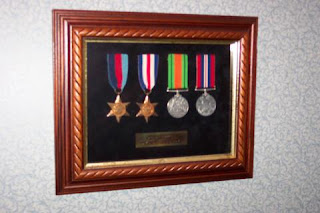 Then in 2008 I decided that it was time to send off for his service record. I read a post on the WWII Talk Forum which explained how to send off for the record. Here in the UK they are only released to the service personnel themselves or their next of kin. So, I sent off the Ministry of Defence form, and enclosed with it the copies of death certificates for both my Grandparents, the next of kin disclosure form, a cheque for £30 and a copy of the pay book revealing his Army number. I received a letter back advising me of a several month wait. So I sat back and waited. Not very patiently as I am not that patient! I was really delighted when about three weeks later I received the Service Record.
I then decided to try and decipher some of the military abbreviations. A sheet of relevant ones had been sent with the documents, alas, there were some that were clearly localised ones! I am still reading and really must get back to it again, but in the meantime, I have set up a blog page to reflect the Military life of my Grandfather called George's War and need to update the page and write some additions.
Posted by Julie Goucher at 7:01 pm