Ancestor of the week - John King

I have mentioned in other posts, here and here about the King family of Puttenham Surrey. Of the family there was only one boy, John born in 1788 in the parish of Puttenham Surrey and died in 1812 in the Gulf of Persia. That small amount of details doesn't seem much to show for 24 years of life does it?
A search of the India Office Records revealed that John had died 29 October 1812 whilst on board the ship Duncan in the Gulf of Persia. At the time of his death he was a Lieutenant in the Honourable East India Company (HEIC) of 21 Madras MI.
A quick search for more details of the ship revealed a website featuring the ships of the East India Company. From glancing at the page it would appear that the ship that John King died upon was the Lord Duncan which remained in service until 1813. Was this a coincidence? Had the vessel not been sea worthy? or was it perhaps disease stricken?
A further Google search revealed a really fascinating view of the Duncan via this web page. Page 134 item 717, which reads
"717 RARE SUNDERLAND CREAMWARE BLACK TRANSFERPRINTED, ENAMEL-DECORATED AND PINK LUSTRE PRESENTATION JUG, GARRISON POTTERY, PROBABLY DIXON & CO. PARTNERSHIP, CIRCA 1813-19. Printed on one side with a rare view of the Wear iron bridge, faintly signed “W. Cockburn,” the other with a view of the “NORTHUMBERLAND 74,” marked “Dixon & Co. Sunderland Pottery,” and inscribed in black enamel beneath the spout “G. J. Sanders” above the verse “Forget me not” within a floral wreath, all within pink lustre squiggles. Height 7 ½ inches.
Literature: This particular Wear bridge view is not recorded in Baker. The central ship depicted in this unusual print is named across the stern “L. DUNCAN.” Launched in 1798, the ship “Lord Duncan” was named after Admiral Duncan, hero of Camperdown, 1797. The print also varies from more common examples with the inclusion of buildings with tall chimneys in the background, and by the ship in dry dock on the right side." 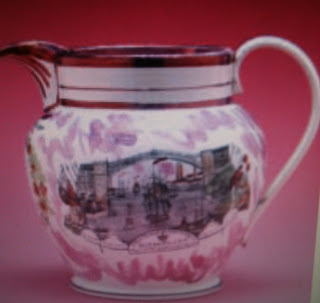 Now, this is a fascinating find as it does give a vague idea of what the ship where my ancestor died upon looked like. I do need to do further research on John King and on the ship.
(note this is the missing post from January 29, 2011)
Posted by Julie Goucher at 6:01 pm