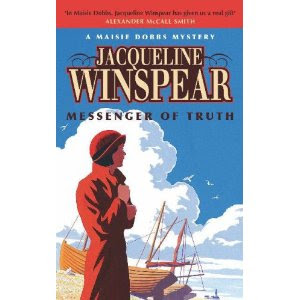 ISBN - 0719567391
Publisher - John Murray 2006
Paperback Edition.
This is the fourth book in the Maisie Dobbs series. This series gets better and better and as the character develops and takes further shape, we as readers are drawn in all the more to a great series.
The central character is Maisie Dobbs, a former nurse during the Great War. Now, though Maisie is a private investigator working in London and owns her own business, car and home. A rarity for the 1930s, this book is set during 1931. During this page turner Maisie is asked by Georgina Bassington-Hope to investigate the death of her brother, a former soldier and artist who died tragically whilst he is setting up an art exhibition. Nick has experienced war. His way of coping with the events he witnessed, first as a front line soldier and then as a war artist, is to paint what he sees and this does not always bode well with those around him. As Maisie investigates she encounters secrets, war stories, smuggling and does eventually seek out the truth.
Meanwhile, her associate Billy encounters a tragedy of his own and Maisie breaks off her relationship with her latest suitor.
The author has captured the essence of a "modern woman", perhaps Maisie was a woman before her time as she sets out on the road to independence and maintaining that independence. Very well researched and despite being a fictional book based upon tragic life events and the aftermath.
Cross posted to Book Reviews
Posted by Julie Goucher at 7:07 am