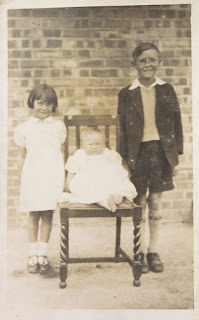 After my Grandmother was forced from the family home she went to live with her sister Elsie and brother in law William Downes called Bill. They lived at Paynes Close in Guildford and I certainly don't remember this as a child.
Elsie and Bill had three children, all of whom kept in touch with my Grandmother and it has only been in very recent years that we have lost touch with one of the two remaining cousins. The eldest child was a boy called Ron. Incredibly tall and with, as my Grandmother always said Matthews features. The little girl standing is Mollie and the baby is Janet. So this photo dates from circa 1937-1938.
Mollie was always very shy, like her brother she never married and they both continued to live in the family home. After their mother died in 1981 and their father in 1985 they remained their together. They were all very generous with to our family and we would visit them and they us, yet the links that I personally felt was completely different to the links felt to my Grandfathers sisters.
Nonetheless, I was very sad to see that Ron had passed away when I came across his gravestone in the Cemetery at Stoughton Guildford in 2009.

Although by then, we had moved from Guildford one of last conversations that I had with Mollie was not to loose touch. We moved away in the Autumn of 1996 and sent and received Christmas cards in 1996. In 1997 I sent a card with a letter and did not receive a response. Every year I always sent a card and did not receive one in return then when I saw the headstone the silence was explained. I do still receive Christmas cards from Janet who has taken to signing it Auntie Janet and Uncle Mike and my questions in the cards as to Mollie always go unanswered.
Word count 315
Posted by Julie Goucher at 7:07 am