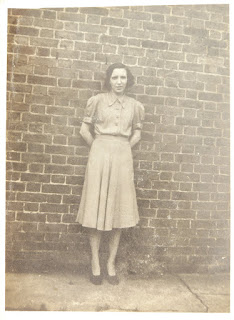 This week I am featuring my late Grandmother, whose family I have focused on thus far in the Family History Writing Challenge.
Born Lilian Edith Matthews in Guildford Surrey on 18th December 1912, the daughter of John Matthews and Mary Elizabeth nee Elstone. My Grandmother was one of 11 children born between 1901 and 1921.
Despite having a really close relationship with my Grandmother so much of her life is unclear, and it was when I started becoming interested in family history that my Grandmother developed the early stages of dementia. I can only describe that as tragic to watch, but nonetheless, I loved her dearly and up until she died we maintained that special relationship and she always knew who I was, although was hazy on other things.
In her earlier life she looked after her brothers, which I described in an earlier post as part of the writing challenge. After she left the family home she went to live with her sister Elsie and brother in law William Downes.
My Grandmother's brothers use to drink, a swift pint after work at the coal yard at a pub called The Plough in Guildford. It was the same pub that my Grandfather's family used. Through this my Grandmother met my Grandfather, and my Grandmother's brother Ernest met and married my Grandfather's sister Margery. It does take a moment or two to get your head around the criss crosses of the family marriages, and I all I can say is that criss crosses of my family history continued after this event and research shows that they had happened before too!
Anyway, at some point between leaving St Nicholas School at Guildford in 1924 and getting married in 1939 my Grandmother had worked at Woolworths in Guildford, always known in our family as Fred's, which sadly demised through the recent recession and Flippance's the Green Grocers in Guildford.
During the war she worked at the Laundry at Guildford dealing with the clothes, uniforms and bedlinen from the hospitals & solders and had three evacuees, which are the subject of the Family History Writing challenge day 7.
Posted by Julie Goucher at 4:35 pm