I recently wrote on my ancestor of the week post about my Grandmother. During the Second World War my Grandmother had three evacuees living with her, whilst at the same time working at the Laundry at Guildford. At the laundry her job was to iron all the sheets from the military hospital and the soldier uniforms.
About a year or so ago Guildford Museum had an exhibition focusing on evacuees and whilst I did have a few photos of one of the evacuees in particular, I submitted the following photo to that exhibition. I was delighted to see earlier that the exhibition had made it to the web and the photograph has been included. 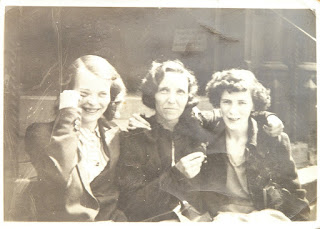 My understanding was the three evacuees all came from London, one was Joyce Moore who remained in contact and friends with our family until she passed away about 10 years ago. I certainly viewed her as a relative. There were also two others, both nameless and one of them is thought to have married an American or Canadian serviceman and returned back to either the States or Canada with him. On the back of the photo is the name of Edie Greenaway. My Grandmother is in the middle. So this is either a photo of my Grandmother with two of the evacuees or two people from the laundry.
I do wonder what happened to the evacuee who made a new life across the pond, and is she still alive today? The address of the house where the evacuees lived was 17 Walnut Tree Close Guildford. If that address rings bells with anyone please get in touch. Whilst my Grandmother is no longer here, we would love to hear more about the events of this time.
Word count 289
Posted by Julie Goucher at 5:01 pm