Beyond the Internet Week 1: Church interiors 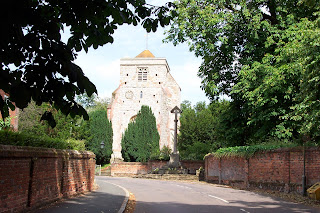 On the very first visit I made to Puttenham in Surrey I just knew I belonged. There was a feeling of completeness.

I walked up the main isle of the church towards the alter and stopped and sat down at one of the pews. Had my ancestors sat in that very spot?

I walked along towards the windows and looked at the stained glass. So vibrant with the sunlight bursting through.

I then looked at the various plaques littered indiscriminately on the walls. 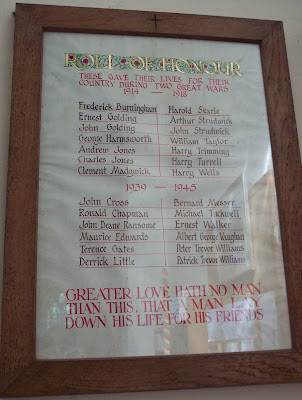 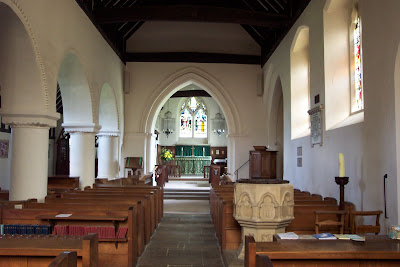 Upon the plaques were the names of people that I had seen in the Parish Records and upon the Census. I remember being so excited I could have burst! 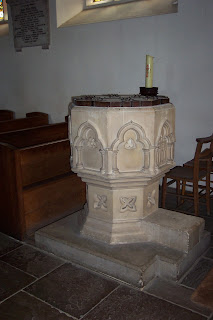 I then walked up to the font. How many ancestors had been Baptised at this very font? I could, time and fingers allowing have worked it out. My earliest known ancestor was Baptised at this font in 1724. This photograph was taken in 2004 - 280 years after that first Baptism.

What struck me as I stood at that font was the powerfulness of it. In years gone by parents would have struggled from their meagre earnings to have the money to pay for their child to be Baptised. There would have been no hesitation. The money would have been found.

So on that day in 2004 I remember telling Stuart exactly how I felt on that very first visit. The feelings of excitement, wonder, completeness. He didn't exactly say I was obsessed, but he did show me a particular look just before his eyes glazed over.

My fascination of the Village has not gone away. I host a One Place Study for the Village and during 2012 the Puttenham Archives that I hold will be placed upon their very own blog. I also need to up date the photographs including taking some of the stained glass windows.

Inspired from Family History Across the Seas.
Posted by Julie Goucher at 11:32 pm

Email ThisBlogThis!Share to TwitterShare to FacebookShare to Pinterest
Labels: Beyond the Internet, Puttenham, Surrey