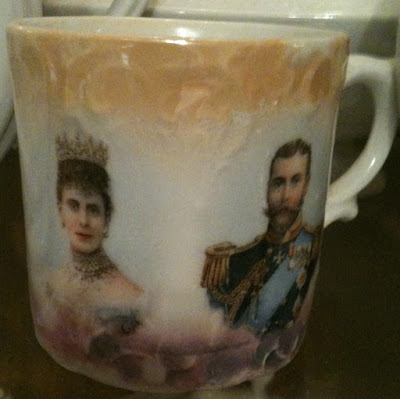 There is not a lot I can tell you about this commemorative. It was produced for the reign of King George V and Queen Mary 1910 - 1935. There are no marking on the bottom. The only patten there is, is the one above. Nothing is printed on the reverse. The little cup, probably a coffee cup is in good order, with a small chip on the top rim.

The china itself has a Austrian feel to it that is replicated in some slightly earlier pieces that I have. Based upon those details and the feel of the china I would date this circa 1910 and suggest that it is a Coronation piece rather than a Jubilee example.