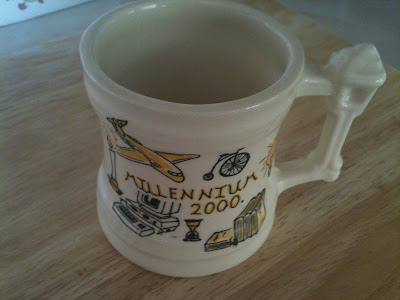 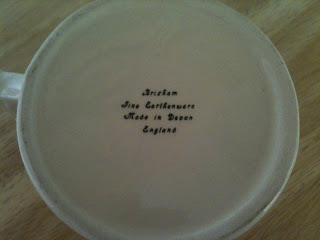 Following on from last week's Tea Cup Tuesday mug. Made from the same pottery and probably purchased from the same shop locally. This is a lovely addition to my Millennium collection.
As I am sure there was the world over, there was much hype about the year 2000. Would our computers still work? Was it really the Millennium or was that the following year? Actually, I wasn't bothered. I had made plans and I kept to them!
For the year 2000 I kept a scrapbook. I wrote all sorts of things. I described the house, who we were and where we were from. I detailed our holiday and kept a few basics, such as things from the local newspaper, a till receipt showing the cost of groceries and petrol. I also made two time capsules. One of which I placed in the loft, the other was placed with my scrapbook and will be passed on to the poor individual who will one day inherit all my obsessions!
Taking part in Tea Cup Tuesday hosted by Artful Affirmations & Martha's Favourites
Posted by Julie Goucher at 12:10 am