A few years ago I was researching a suburb of Guildford called Merrow. The area is situated on the outskirts of Guildford and was the home to some of my Elstone ancestors.  The records centre was then based at Guildford and when I called for some of the Parish Registered for Merrow it arrived with some of the school records. I went through the school records and made notes for all the related surnames. I still have those notes I made that day and from following visits. I suspect that I may transcribe what Merrow information I have and place it upon a blog in the future.

What does sadden me is that whilst I have those details for a more distant relative I have no references to my Grandmother's school years at St Nicholas School. I know that my Grandmother left the school when she was 14, in 1926. I know nothing of my Grandfather's school years, in fact now I think of it I don't know where he went to school and despite the series of notebooks of questions and answers to my Grandfather's sisters, all now deceased, I still don't know. It was a question that I never asked.

In Surrey, during the 1950s a two school system was operated. My Mum went to Sandfield Primary and then onto Stoke Secondary School. There are no school photographs, but Mum's school reports have all survived.
By the time I went into the education system in Surrey in the mid 1970s there was a three tiered system. I like Mum, went to Sandfield Primary, then Holy Trinity Middle School and finally Guildford County School. From my School days I have rather a lot of information including some that I had forgotten I had!

From my school days I have every school report. This photo shows the reports from my first two schools. 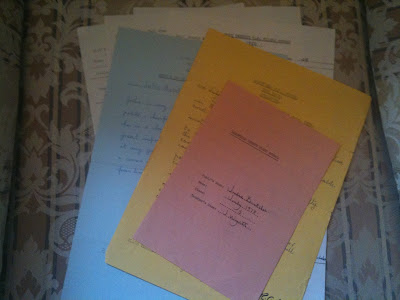 Reports from  my Senior school, Guildford County were presented in a small booklet format with an apple green cover on the front. I still have those, but they are in a box that I can not reach!

Guildford County issued pupils with commendations at the end of each term. Here is a photo of all mine! 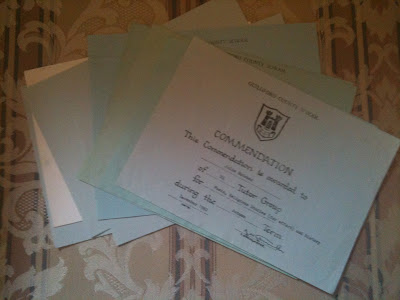 I also have the programme for Prize Giving Presentation and for my success in the Duke of Edinburgh Awards Scheme. I still have the little green book and badges also awarded to me. I had forgotten about those, but now recall they are with the County school reports 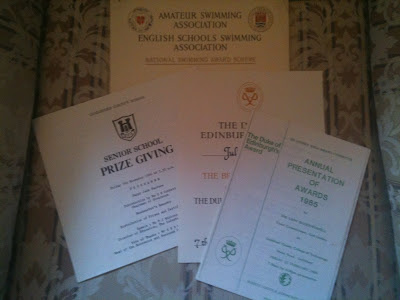 I really enjoyed this week's prompt. A trip down memory lane and sad wishes of questions that I wished I had asked.
Posted by Julie Goucher at 9:33 am

Email ThisBlogThis!Share to TwitterShare to FacebookShare to Pinterest
Labels: Beyond the Internet, Personal Genealogy, School