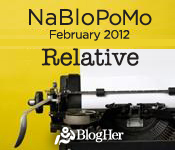 As I commenced to write my first post I wondered what is relative? A quick look at the definition in the dictionary revealed this:

1. Having pertinence or relevance; connected or related.
2. Considered in comparison with something else: the relative quiet of the suburbs.
3. Dependent on or interconnected with something else; not absolute. See Synonyms at dependent.
4. Grammar Referring to or qualifying an antecedent, as the pronoun who in the man who was on TV or that in the dictionary that I use.
5. Music Having the same key signature. Used of major and minor scales and keys: A minor is the relative minor of C major.
n.

1. One related by kinship, common origin, or marriage.
2. Something having a relation or connection to something else.
3. Grammar A relative pronoun.

As a genealogist, the word relative is generally used when we can not or do not want to be specific. Nothing sinister, but how can you explain that your 15th Cousin twice removed on your mother's side is standing next to you? So you either say this is my cousin and remove the specifics or this is a relative of mine which case you remove even the cousin link. By using the word relative it may imply that you believe you are related, but how is anyone's guess.

Through the course of research, you meet in person, on line or perhaps by post an individual or perhaps two, who have a family connection in some way. Not necessarily a close connection by blood, but one that you share a link of interest with perhaps someone who lived 200 years ago. I have many of those cousins. Some of whom reside in another part of the world, some have been and visited us and lived with us for a time, others I have never met, yet we share emails filled with the incidentals of our lives coupled with genealogical material.

Many of us grew up with Aunts and Uncles who were not, in the true meaning of the words, Aunts and Uncles, but held some other connection to the family. The term usually used as a mark of respect. I had such an Aunt and Uncle. They held no relation to me at all.

Aunt was simply a former evacuee of my Grandmother's during the Second World War. That sentence implies a simple fact. It does not indicate any form of emotional attachment; and there was emotional attachment. My Mum was given the evacuee's name as a middle forename. We exchanged Christmas gifts. Once their children were adults, my Grandmother would still send a £1 coin to "the boys". Whilst the value of the gift was small, the meaning and attachment was huge and as important as ever. Over the years I would meet the various family members of the evacuee, and her husband, and that relationship remains with us to this very day. So out of the passage of War came something of immense value, and something that as two families we treasure.
Posted by Julie Goucher at 2:38 pm

Email ThisBlogThis!Share to TwitterShare to FacebookShare to Pinterest
Labels: NaBloPoMo