Introduction
I started my research deep in a rural village in the depth of Surrey England. As my research evolved and I researched back through the generations exploring the lives of direct and indirect ancestors I stumbled into the surname of Bellasis.

The connection starts through the my 7 x Great Grandfather Henry Budd. Henry and his wife Martha nee Ottway raised a family of 8 in Puttenham from 1724. I can speculate on the birth place of Henry, as the neighbouring village of Shackleford as documentation in the village of Puttenham indicates "First of the Budd's", so I know he was not born there. There are some early records which indicate that a Henry Budd was resident in Shackleford and there are also references to Henry Budd in the neighbouring village of Elstead a few miles away. Certainly these villages were within walking distance of my 18th Century ancestors.

Henry and Matha raised their family of 7 children in a time, fairly reminiscent of Jane Austen's Pride and Prejudice. I can almost hear and feel the panic as Henry and Martha realised that they need to marry off their daughters to Gentlemen of certain means.

Their eldest daughter, Ester married George Bridges Bellasis. I have written before about the antics of George during his time in the East India Company, (for that post click HERE). The Bellasis family were well established. As I researched further through the line of Bellasis I encountered the half brother of George, Edward Bellasis. George's father had been a vicar and so I was very surprised to see that Edward converted to Catholicism in 1850. It was this angle and part of the family that posed the most research and questions, not only about the family, but about the religious aspects to it.

Edward Bellasis was born in 1800 to the Rev. George Bellasis and his second wife Leah Cooper Viall. Edward lead an interesting life, he was educated at Christ's Hospital and undertook legal studies at the Inner Temple. He formed a legal practice at the Chancery Bar and retired from legal practice in 1867. He died in France in 1873.

He was received into the Roman Catholic Church by Father Brownhill on 27 January 1850 and soon after his wife and children followed. He was keen on all things Catholic and was fairly instrumental within the Roman Catholic community; including founding the School of Oratorians at Edgebaston. Edward married twice, but it the children of his second marriage to Eliza Garnett that takes us along a fascinating path.

Together, Edward and Eliza had 10 children. Two sons, the eldest and youngest became Priests and three of his daughters became Nuns.

I had barely interpreted the information of the conversion, when I was sent this photograph by a fellow researcher. 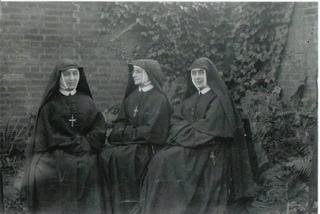 The photograph is of three of the daughters of Edward Bellasis, Monica, Mary and Cecelia Bellasis. Where would the research lead and how far could I research their lives as Nuns? Now, I was in uncharted waters in relation to my research skills.

The Catholic Family History Society holds an index of Nuns, who were in the English Province of their Order. The index itself reveals the date of birth for the Nun, names of parents, religious name, dates of profession, date and place of death and the name of order.

Here are the basic details contained within the index:

Just these few basic facts give me, in addition to the timeline of their existence a starting point as I try to piece together their lives within their Church and Faith. I think this is going to be an interesting journey.........

Posted by Julie Goucher at 7:33 am