I do not believe that I have ever read a genealogical document, even those I have read before or those that I knew existed, and thought "Okay!" I have always finished reading and pretty much immediately thought of a question that perhaps I need to ask or explore. Then the mind starts to race and we are off on another journey of discovery.

Sometimes, the road to discovery is simply a path of research and we follow one document or fact after another and it perhaps leads us to where we thought it would. Perhaps, no, not perhaps, it probably leads us to another question or thought. Sometimes that path makes unexpected twists and turns and we find ourselves completely out of our research comfort zone, or perhaps somewhere we we did not expect to; maybe migration to a Country not yet explored. Maybe an occupation that is mind blowing, in terms of skill or process. Not just how something was done, but how that something was done in say the 18th Century.

The journey we each make with our ancestors is full of the paper trail - names, dates and places. births, marriage and death records, census returns. These are the back bone of our research, but what about the other bits of research. How was something done, where was it done? Perhaps why was it done? Even, who was it done with.

My Great Great Grandfather, my Grandmother's Grandfather, was called John Matthews. He was a coke dealer. Yup, that black stuff that is mined. Not the illegal drug we know of today. He had a business in Rugby Warwickshire, was married and raised a family of three children. A small family for the 1870s; small because his wife died. He did remarry, but there were no children to that marriage. He also moved from Warwickshire to Surrey. Immediately I want to know why did he relocate, what happened to his business. Where did the coke come from and where did he sell it too? Did he employ men and they knock on doors and deliver coke?

My Grandmother told me that her Grandfather lived with her when she was a child, but he died when she was small. So, based upon that fact I searched for the death record from 1912 when my Grandmother was born. John in fact died in 1927. What made my Grandmother think he had died when she was a child?  From information that was also shared was that he was a "dirty man" - what did that mean? He would not wash, and would wet himself. He could not longer remain living with his son, daughter in law and 11 Grandchildren. Where did he go? Looking at the death certificate revealed the perhaps the reason. He died of senile decay.  - in 1927 conditions such as Alzheimer's and other forms of dementia were not known to have existed. 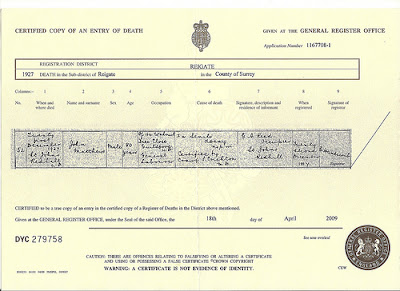 Is that so very different to some 80 year old individuals now? The address where he passed away is not known to the family. There was a brief mention of Redhill, but no family member lived at that address. More research is needed on that point. The address in Guildford is known. It is where my Grandmother lived as a child. The person who registered the death is not known to the family. Did he then die alone?

There were lots of questions to start with, but seeing the original document, so many more come to mind.