There has not been a Ramblings post since before Christmas, so I thought that it would be a good chance to catch up and write one!
Despite the forecasts there has not been the truly bad weather of the last few Winters here in the UK, or at least not in my part! Despite that I have not been out and about much, because of my back, but there is light at the end of a long tunnel! My walking is slightly more than a shuffle still, I am though able to do go around the block accompanied by hubby when walking Alfie. Otherwise, its the car for everything and then a short shuffle into various buildings. Very frustrating when you are used to racing about and standing for hours on end with the day job.

I finally got my appointment to the Spinal Clinic. It was OK; I wasn't enthralled with the specialist, but you can't like everyone! I was referred for a MRI scan and was told that the waiting time was now 8 weeks. Now, I have been waiting for the Spinal appointment for almost 3 months, and it was fairly clear that a scan would be needed. So, I telephoned the hospital and told them it simply was not good enough. When the head of Radiology was no help, I managed to get the attention of the Chief Executives Office....

Within 10 minutes of that telephone ending I had a further call and suddenly was offered an appointment for the following day. I have mixed feelings. I should not have to phone and make a fuss in order to get an appointment, nor should my profession influence the speed, but for goodness sake the NHS, whilst is a wonderful service is not fit for purpose. Too many managers and to few staff. From looking at a recent health professional journal, the new health proposals are not looking like improvement. So scan over and a week later, I now have the results. Now I am waiting another month for an injection into my spine that will hopefully do the trick. If not, then I need to do some serious thinking about the future.

Moving onto much more interesting matters! I was approached a short while ago by the on line Surrey Life asking if they could permanently link to my Guildford and District Blog, which is great news. Not such good news, I see this morning that the last week of scheduled posts have not published, which is slightly irritating on my post card a day theory! So that needs to be fixed.

I often write posts several weeks in advance. I have been working on two projects for this month - The Family History Writing Challenge and the NaBloPoMo theme for February which is the word of "Relative". Whilst the posts are written in advance I am now catching up with proof reading them, before publishing. So expect a bit of an influx over the next week! Next up will be the A-Z Challenge in April.

I have written two guest posts for this month, one published on Catholic Gene, the other to be published next week. Keep watching the blog for details. I have also appeared on the Genealogists for Families Project blog. This is a really great project, whereby you loan $25 through the Kiva system and then are repaid. If you are interested click HERE to read more and join! I decided at Christmas that I would link my loans to genealogical  and family dates.

February has always been a month of two special birthdays - My Aunt who passed away in December 2010 at 95 and my Mum. Their birthdays only a few days apart. So, I plan to make a commemorative Kiva loan in memory of my Aunt,who was such a inspiration to me and a very special lady. I also plan on making a further Kiva loan to celebrate Mum's birthday. So that will happen over the next week.

Last weekend I had a spell of unwanted comments on this blog. So for a time I went to moderated and I wrote to Google. Since then, fingers and legs crossed I have been unwanted posts free! Welcome to the new followers to this blog. I am always delighted when people want to read my posts and make comments. I am quite behind on replying to comments at the moment!

I have also had a few nice comments about the Anglers Rest blog, (blush!). Last year we spent two separate weeks in the Channel Islands, on the super Island of Jersey. I have blogged about the first week and I am about to restart about the week we had there in the Autumn. You can read the Jersey posts HERE 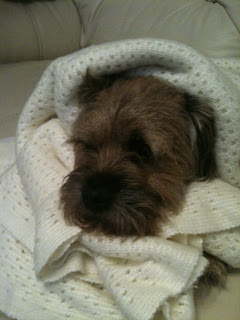 Just before I go, Alfie has not made an appearance for a while, so here is a photo snapped last week.

Until next time!
Posted by Julie Goucher at 8:33 am