I always think it is sad to come across a gravestone of someone who passed away many miles from home. I don’t mean those who are born in one Country and live and pass away in another, I mean those to whom death occurs and is unexpected and occurs away from home.
The point of headstones is that there is a marker to indicate that behind the name and perhaps a set of dates a person existed. It is a visual spot whereby loved ones can pay their respects and mourn.
I live in the coastal town of  on the South Devon coast of . I have no specific reason to visit the cemetery and no one that I know is buried there. After a few years we paid a visit to the cemetery and simply wandered around. Looking at the headstones that were erected with love and now simply a testament that someone had cared enough to place a stone, but perhaps there is no one left to visit and lay flowers.
One headstone was dedicated to a Russian mariner. Teignmouth has a working port and ships regularly dock here, both now and in the past, loading and unloading their cargo. Knowing this fact I was not surprised to see such a headstone, commemorating the passing of an individual who died many miles from home. On the few occasions I have seen the grave there are no flowers left and it suddenly occurs to me that this individual passed away 100 years ago. Perhaps there are no family left who remembers this man, perhaps his name is simply a question mark in someone’s ancestry – his existence is known, but the details surrounding his death and burial place is not.
In October 2011 my husband and I visited the  of  which lies in the seas of the British Isles and yet rather confusingly is governed completely independently of the . The Island lies 14 miles off the coast of . I was looking at a map as we planned the following day’s activities. In the smallest of print I spotted the following words “W.W.2 War ”. The next day we headed off to our planned destination by way of a detour to the park which hosted the graves mentioned.
The board of interest indicated that the grounds were given to the people of  in memory of a local land owner whose son had perished in the First World War. We then followed the path to the War Graves.
There, we felt overwhelmed. In front of us lay two groups of graves. The graves represent Servicemen who died during the Second World War. Some individuals were named, others were not. These were men whose bodies were recovered during the War and were buried within the confines of the park with the respect they deserved. They were cared for in death by the population of an  that was inhabited from 1940 by the German Army. Yet, despite those tough times, the local population wanted those individuals to be remembered.
As we walked along the rows of headstones, reading the names the grounds man was mowing the prestige lawn. The pattern created by the mower in uniformed strips. I stopped to talk to him and asked him about the headstones. He said rather sadly, very few people come here to see them. When I asked why, he said very simply “people forget they are here and time passes by…..”
He is right, time does pass by, but we should never forget this sacrifice. The majority of these men died many miles from home and now lie in a foreign land, some from within the  and serving in the British Armed Services, others from the . Only one Grave represents Islander and that is the Grave of Maurice Jay Gould who had been born in  in 1924. His birthplace meant that he was deported from the  at the start of the Occupation. He died in  aged just 19 in 1943. His body was returned to the  in 1997 and buried in this special place. 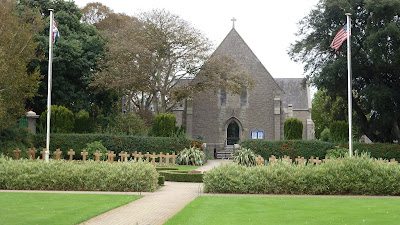 This post also appeared at On line Journal of Grave yard Rabbit
Posted by Julie Goucher at 6:17 pm