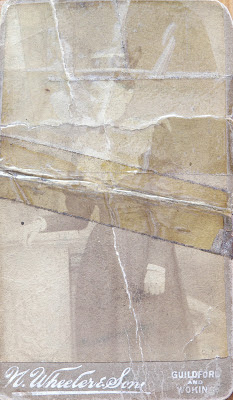 Today's photo is the only known photo of the early life of my Great Grandmother, who was my Grandmother's mum. I have talked about her on both day 4 and day 7. In this photograph she is just aged 18 years old. I really should try and do something with the photograph and see if I can make an improvement.
In her early days, Mary Elizabeth Elstone was born in Liphook and baptised in neighboring Bramshott, in Hampshire. The Elstone's had been in this part of Hampshire and across the border into Sussex since around the early 1700s. A John Elstone inherited a papermill in the area through his marriage into the Pim family.

Readers, may recall an earlier post in which I mentioned that the Elstone's were papermakers and that there was a small hamlet in Devon, along the banks of the River Exe called Elstone.

Coincidence? It is possible the the families migrated across the south west of England into the south east region. There is healthy research into the paper making  facilities across the UK and in particular the South of England, so when I get a few minutes (make that hours and possibly longer!) I will research this more fully. Over the years I have looked at the data, but I do need to devote more time to it.

I have no idea as to whether or not Mary Elizabeth knew of her paper making connections. The family were labourers in the passfields area of Bramshott and later moved across to Burpham at Guildford not far from the Merrow area where she met her husband John Matthews.
Posted by Julie Goucher at 12:55 pm