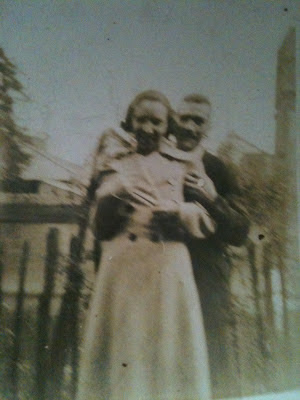 Today's photo is a little blurry, sorry about that, but that is the photograph!

This is the garden of my Grandparents home in Guildford. This photograph, despite being so blurry is a favourite. I date this around 1960.

The detail in the background is the old laundry which I mentioned in last week's Sepia Saturday post. As I type this I wonder if those two pictures were taken the same day.

From the way their vision is, they appear looking down, so I wonder if the photographer was in fact my Mum, which might explain it being blurry!

The house was situated in the road where my Grandmother was born. After her brothers gave up the house, she went to live with her sister Elsie and brother in law Bill. When she married in 1939 she moved with my Grandfather into a house at Bright Hill at the other end of Guildford and then they moved into this house in 1940. The house remained with the family until 1996.
Posted by Julie Goucher at 7:10 am