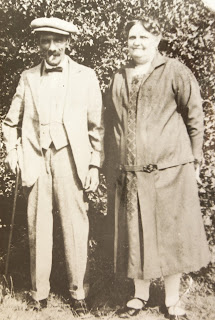 Today's photograph is of my Grandmother's parents. John Matthews and Mary Elizabeth, nee Elstone. I mentioned them earlier in the challenge; as it was their grave I talked about on day 4.

They both died in the 1930's, John in 1931 and Mary in 1937. My Grandmother always spoke very affectionately of her parents saying her Dad was a real joker, which is something I think passed down to my Grandmother. Her mother was a real stickler and took no nonsense from her boisterous sons.

Mary was a bit of a worrier and from listening to my Grandmother, her youngest daughter I think was troublesome and caused a bit of worry. Probably nothing more than going out with friends and meeting boys, which is perfectly acceptable but these were different times and My Great Grandparents were born during the Victorian era, when things were different and "proper"


John Matthews was born in Rugby Warwickshire and migrated to with his sisters, Mary Anne and Edith; father and step mother. His father had been a coke dealer in Warwickshire and so far I have not been able to establish what work he did in . John though worked for Frank’s Coal Merchants in as did his sons. Their house was owned by Franks Merchants and after John died in 1931 Mary remained in the house looking after her children. When Mary died in 1937 my Grandmother looked after her brothers, her eldest sister had married and moved to an address in and the younger sister was intermittently at home.

One day my Grandmother came back from shopping, which in the 1930's was a daily event, the days before refrigeration, to find a wagon outside taking the furniture. Her eldest brother had given up the house and was moving out. My Grandmother never forgave her brothers for their lack of honesty, trust and respect and was deeply hurt by the situation. She went to live with her older sister and at some point in the 1930's met my Grandfather, who in turn met her brother Ernest who was only 11 months older than my Grandmother in the pub. Ernest went on to marry my Grandfather’s sister.

It is dreadfully sad and really indicates why my Grandmother apart from the relationship with her older sister turned to her husband’s family. She did write to a younger brother who lived in , but had very little contact with the rest of her siblings, and whilst that is very sad, it was the way she preferred it.
Posted by Julie Goucher at 5:00 am