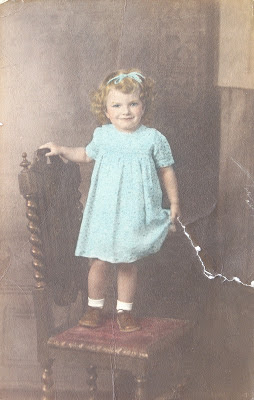 Today's photograph is one of my favourites. This is an early one of my Mum, taken around 1951, which dates from her pre-polio days.

I love the way she is standing, the pose, holding the dress. It is simply so cute. Mum can not remember this being taken, but she did I think recognise the chair! That lovely turned wood.

Although my Grandparents married in 1939, Mum was not born until after the war, during the "Freeze of 1947" which is one of the worse winters the UK experienced.

We don't know how long the labour was, except that after the birth, which happened at home, in the house my grandparents moved into in 1939 and our family association left in 1992, Mum was so small that she was placed in a drawer as she was too big for a cot.

Even though the birth happened at home, my Grandfather was not permitted in the room and I can imagine him pacing downstairs nervously awaiting to know that his wife and baby were okay. That leaves me to wonder who was with my Grandmother? By then her own mother had passed away and as far as I can tell my Grandmother got on well with her in laws, so perhaps my Grandfather's mother was there, or his sister Doll or my Grandmother's sister Elsie.
Posted by Julie Goucher at 10:00 am